Where the Blame Lies by Mia Sheridan #DualReview 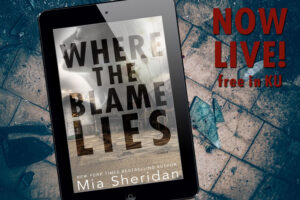 ‘Casus belli.’ Where the blame lies.

Mia Sheridan is flexing her writing muscles into the romantic suspense genre and coming out strong! Mia   self-proclaims that “Her passion is weaving true love stories about people destined to be together.” Where the Blame Lies is certainly different than any of her other books. The mood of the story is on the darker side and may contain triggers for some. The story is layered and detailed, told in the past and the present.

“Even the darkest night will end and the sun will rise…”

Josie Stratton was kidnapped by a madman and held shackled for ten months in an abandoned warehouse before she finally escaped her hellish prison. Prior to the kidnapping, Josie had been a carefree college girl. Eight years later her past comes back to haunt her as another kidnapping victim, a female college student, is found dead. The similarities in the case are haunting. Josie’s attacker died of suicide leaving the police to ask if this is the work of a copycat killer?

A series of choices-some bad, some good, some seemingly meaningless-could lead you places you’d never set out to go.

Josie’s “before” story is told in excruciating detail. I could almost feel the cement floor she was lying on. As the story builds, so does the complexity. The layers are piled on. I kept thinking I knew, I just knew who the horrible person was that did these terrible things. But then did I really?

Josie’s character goes through periods of self-discovery and incredible strength. Again, I could feel her fear, her anguish and her triumphant emotions through the whole story.

Detective Zach Copeland has a connection to Josie in more than one way. They are thrown together as he races to find the madman who is out to hurt not only Josie but other innocent women as well. Zach is alpha, strong and compassionate.

Where the Blame Lieswill take you out of your comfort zone. It is intense and continues to pack a punch up until the end which includes a few surprise revelations. I will say that although I was happy with the ending (there seems to be some conflict about it) I would have loved an extended epilogue. Maybe something 5 -10 years down the line. A bonus chapter at the end of a future book?? (Hint-hint) If you are looking for something different, intriguing and suspenseful then Where the Blame Liesis for you! Bravo Mia Sheridan! Bravo!

The war is over…. 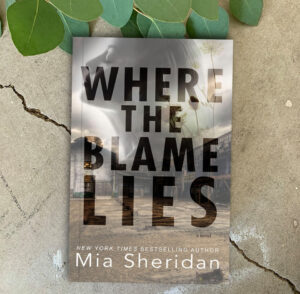 This was a somewhat difficult book to review. I feel conflicted in some ways. The premise is perfection. The storyline bounces back and forth in time from when the heroine was held captive in a basement chained to a wall, and present day when she’s helping detectives find a murderer. The reason I’m so conflicted is because the entire storyline that takes place in the past is very well written, edge of your seat suspenseful, heart breaking and tragic. The present day writing just didn’t hold that same quality in my opinion. The present day storyline was just ok for me. I didn’t connect well with the emotional side of the heroine in the present, but the hero was a a great guy. He was alpha, protective and swoon worthy.

I ended up rating the book 4 Stars because the author just did such a great job with creating the suspense, describing the abuse and making the reader literally FEEL the heroine’s emotions when she was trapped in that basement. At times, we as the reader experience strong feelings akin to what the heroine felt during some of the most traumatic moments. There was one event in particular, perhaps the pinnacle of the heroine’s time in the basement, that i literally had tears in my eyes reading. I felt that strongly about what was happening. I don’t want to give anything away so I’m intentionally being vague. You should experience it for yourself. That’s what made the entire book for me.

I would definitely read more from Mia Sheridan. She’s a talented storyteller. 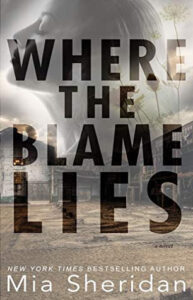 Where the Blame Lies

At nineteen-years-old, college student Josie Stratton was kidnapped by a madman and held shackled for ten months in an abandoned warehouse before she finally escaped her hellish prison.

Eight years later, when the body of a young woman is found chained in the basement of a vacant house, Cincinnati Police Detective Zach Copeland is instantly reminded of the crime committed against Josie Stratton. Zach was just a rookie on the perimeter of that case, but he’s never forgotten the traumatized woman with the haunted eyes.

As more information emerges, the crimes take on an even more sinister similarity. But Josie’s attacker died by suicide. Does the city have a copycat on its hands? A killer who picked up where the original perpetrator left off? Or are they facing something far more insidious?

Josie has spent the last eight years attempting to get her life back on track, but now there’s a very real chance she could be the unknown suspect’s next target. As Zach vows to keep her safe, and Josie finds herself responding to him in a way she hasn’t responded to any man in almost a decade, the investigation takes on an even more complex edge of danger.

As past and present collide, Josie and Zach are thrust toward a shocking and chilling truth. A revelation that threatens not only Josie’s life, but everything she’s been fighting so desperately to reclaim.