Until June, by Aurora Rose Reynolds

June Mayson and Evan Barrister’s whirlwind courtship resulted in a secret marriage right before he left for boot camp. Evan knows deep in his gut that June is too good for him, but after getting a taste of the beautiful life they can have together, he’s unwilling to let her go. June promises to wait for him, knowing neither time or distance will ever change her feelings for Evan—that is until she’s served with divorce papers while he’s overseas and she’s forced to let him go.

Her marriage and divorce a well-kept secret, the last person June expects to run into when she moves back to her hometown is Evan. Angry over the past, she does everything within her power to ignore the pull she feels whenever he is near. But how can she ignore the pain she sees every time their eyes meet? How can she fight the need to soothe him even if she knows she’s liable to get hurt once again?

Is it possible for June and Evan to find their way back to each other again? Or will they be stopped by an outside force before they ever have a shot?

I am a huge fan of Aurora Rose Reynolds. I loved the “Until Series”. It is my go to series when I need a pick me up. Until June does not disappoint. You can read this book as a standalone, however if you read the series or even just the second generation of the series: Until Jax & Until July you will appreciate the story more and understand the background. This book has it all. Classic Aurora; hot sexy alpha male, intelligent female, chemistry and lots of steamy, steamy stuff. I feel like there is, even more, sex in this book than some of the others, not that I am complaining. This story is about Evan & June. June Maysen is from a large family, full of alpha males. She is one of five sisters with many cousins both male & female alike. Her family is large, loud, loving, and loyal. There is a lot of testosterone! Evan Barrister’s family is small and broken. His mom is an alcoholic, his brother is in and out of jail and his dad is physically abusive. June is away at college and meets Evan. They fall hard and secretly marry before he deploys overseas. But things change and June is suddenly severed with divorce papers from Evan’s mom. Heartbroken, she tries to move on. Fast forward a few months and June has graduated college and moved back to her hometown. Much to her surprise and dismay she runs into Evan who is working for her cousin, Jax. Emotions are high as June realizes she is still in love with Evan. Evan, who had returned from overseas has changed. He feels unworthy of June. It is heartbreaking. Circumstances bring them together. When Evan turns up his alpha male and they come together there is an explosion of emotions, chemistry and heat! Hot hot heat! As I said before, it is classic Aurora Rose Reynolds. A fun, sexy, feels good story with a twist of drama. Get to know the Maysen men & women in this series. You will not be disappointed. 4.5 stars 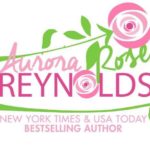 NEW YORK TIMES WALL STREET JOURNAL AND USA TODAY BESTSELLING AUTHOR Aurora Rose Reynolds started writing so that the over the top alpha men that lived in her head would leave her alone. When she’s not writing or reading she spends her days with her very own real life alpha who loves her as much as the men in her books love their women and their Great Dane Blue that always keeps her on her toes.