Tour Stop: THE SUBMISSION of ALISTAIR INGRAM by Kelli Maine 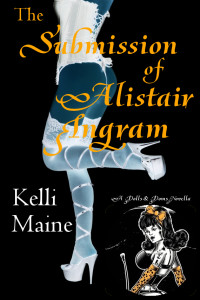 We are thrilled to host today’s stop on The Submission of Alistair Ingram Blog Tour!

Isn’t this a beyond sexy cover for the eBook version of TSoAI? Love it!

Ever wondered what happened when Alistair left Dolls and Doms after meeting Black Betty? Say yes, Mistress. Well, here’s a peek into that night.

Alistair slid his keycard into his hotel room door and stumbled inside. What the hell? Why were the lights on?  And that perfume…no.

“Surprise, Ali!” Heather, his fiancé, strode out of the bedroom of his suite.

“Yeah,” he said, looking down at his torn dress shirt and the red welts from hot wax left on his chest from Black Betty. “Surprise.”

“What. The. Fuck. Alistair?” She came at him and shove his shoulders.

He took a step back and grasped her wrists. “I can explain. Burton too me–”

“I don’t want to hear it!” She stormed past him and grabbed his laptop. “Get your shit and leave! We’re over!”

“This is my room.” He reached for his laptop and she held it over her head like she was going to throw it against the wall. Her face was flush and her arms quaked with rage. “Put that down. Please.”

“Fuck off!” She threw it. It bounced off the wall and landed on the floor with a sickening crack.

“Nice. I just bought that.”

“You never wanted to marry me!” Heather came at him again. Her hand reared back and he knew what was coming, but figured he’d give her this one. He deserved it.

As her hand came smacking across his face, he squeezed his eyes shut against the sting. “Wow, that was a good one.” He rubbed his cheek. “I know what this looks like–”

“What this looks like?” she shrieked, and smacked her palm against his red, welted chest.

“What this looks like is you fucking another woman! Some skank whore you picked up in a bar, right? Let me guess that drunk you call a best friend hired her for the night? I told you I don’t want you hanging around with him anymore. I told you–”

“You don’t tell me shit. You got it?” He threw her arms down to her sides and headed into the bedroom. He’d had enough of this night.

“Don’t you dare go in there and act like this is over!” She grabbed him by the color of his shredded shirt and yanked him backward. “Get the fuck out of here, Alistair. Go stay with your whore!”

God damn it, this was so not worth it. “You know what? Fine. We’re done. You’re right. I never did want to marry you. That house I bought? I fucking hate it. It’s the ugliest fucking house I’ve ever seen. I’m selling it as soon as I get back to L.A.”

He grasped the door handle and shoved his way out into the hallway.

“I knew it! You son of a bitch! You never wanted to marry me.”

He pushed the elevator button and she jabbed her elbow into his back. He arched forward into the metal door. “What the fuck, Heather?”

The door opened and he stepped inside. She followed. “I want to kill you for this!”

He pushed the L button for the lobby and prayed he made it down while still breathing. “I’m sorry.”

“You’re sorry? You’re fucking sorry?” She let out an incredulous laugh. “Do you have any idea how this will humiliate me when it hits the papers? When it hits TMZ? I can’t hold on to a fuck-up like you.” She dropped her face in her hands.

A fuck-up like him. Yeah, he couldn’t argue with that. Tonight was exhibit A. “I’m sorry,” he said again. What else was there to say?

The elevator hit the lobby floor and opened. Heather let out a growl as she exited after him and before he knew what hit him, she was screaming and a crystal bowl of mints thudded into his back and crashed onto the floor.

Nothing would ever be the same again. Black Betty had ruined his life.

Find it on Amazon: http://amzn.com/B00BEMD8FW