The Shape of You by Felice Stevens @FeliceStevens1 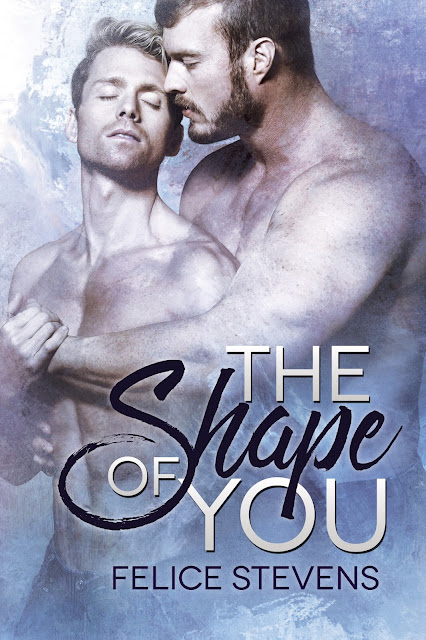 Title: The Shape of You
Author: Felice Stevens
Genre: M/M Contemporary Romance
Release Date: June 29, 2017
Blurb
Too big. Too fat.
All his life Eric Sontag has judged himself on his size,
believing love and friendship aren’t in the cards for someone like him. Tired
of being alone and scared of his doctor’s warnings, he enrolls in a nutrition
support group, determined to change his life. When a beautiful thin man sits
next to him, he can’t believe they have anything in common, but conversation
between the two soon proves first impressions aren’t always what they seem.
Drifter. Loner.
Corey DeSantis has always been the scrawny waif; he’s tired
of struggling with his art and with life. Scarred by the disappearance and
death of his drug-addicted mother, he doesn’t wish for love, believing it will
bring him nothing but pain in the end. Now his only hunger in life is his
desire to paint…until a health scare and his mentor force him to attend a
nutrition class where he meets a man who piques his interest. One drunken kiss
later, Eric is all Corey can think about. The same, yet different.
An unlikely friendship is born with both men wanting more
but afraid to listen to their well-guarded hearts. When Corey receives shocking
news leaving him angry and helpless, it’s Eric he turns to, to help see him
through, while a surprising career opportunity finds Eric leaning on Corey for
advice. One night of explosive passion leads to a second and soon neither man
can imagine a life without the other. Life is shaped by the challenges accepted
and roads not taken but as Corey and Eric walk the path together, they’ll
discover the most beautiful destination of all. Love.
ADD TO GOODREADS

Felice Stevens writes such beautiful inspirational love stories and she always has me falling for her guys! The Shape of You is just another prime example of her talent. It is a unique story that was forlorn at times but filled with so much hope, love and ultimately light….. It shows us how by taking one step in the right direction can change our lives forever. Never give up, there is always hope! Eric & Corey prove that love can truly conquer all….

I LOVED THESE BOYS.
Eric is my gentle, loving and shy teddy bear, while Corey is my wild, mysterious and broken boy. Throughout the book, I volleyed with who I loved more…. Both are perfectly imperfect!

They met at an Eating Disorder class. Eric decided to go because he is overweight, he is afraid to suffer the same consequences as his father, dying too young. While Corey has the opposite problem, he is underweight, which ultimately caused him to be hospitalized. Both guys needed to get their eating habits in check before it was too late. Their self-loathing body image of themselves had hindered their lives immensely. I totally felt all their pain. They were so lonely, despondent and detached…. All making my heart hurt for them. No one should ever feel unlovable or grotesque!

In class, they decide to buddy up. Both being loners that often push people away, this proved to be a challenge. This unlikely pair started to form a friendship, but they also felt a magnetic pull towards each other. Some kissing and groping later, confusion set in. Eric who has never had a real relationship didn’t know what to with his feelings and lust…. Corey on the other hand was used to frivolous relationships. Both became wary and scared with what was happening between them. I loved watching them dance around their new budding relationship. It wasn’t easy, especially with the walls and insecurities they both had… Plus their many issues, but together they learned and transformed. Giving each other what the both desperately needed. I loved how with time and patience they conquered their issues and fears TOGETHER.

As always with Felice’s books, I am walking away with so much more than a great read…. I need to thank her for giving us two different perspectives on weight issues. I have a new appreciation for their struggles 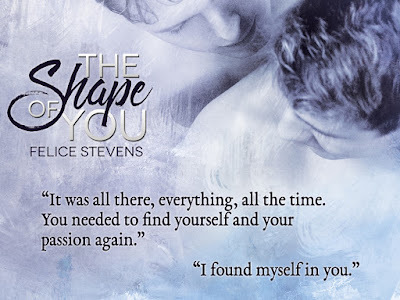 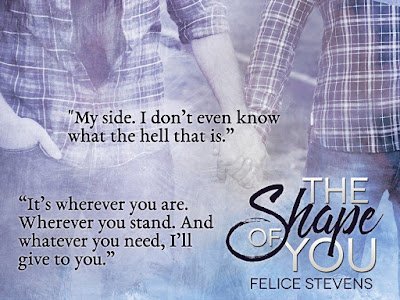 Author Bio
I have always been a romantic at heart. I believe that while life is tough, there is always a happy ending around the corner, my characters have to work for it, however. Like life in NYC, nothing comes easy and that includes love.I live in New York City with my husband and two children and hopefully soon a cat of my own. My day begins with a lot of caffeine and ends with a glass or two of red wine. I practice law but daydream of a time when I can sit by a beach somewhere and write beautiful stories of men falling in love. Although there is bound to be a few bumps along the way, a Happily Ever After is always guaranteed.
Author Links
NEWSLETTER

Tags: Felice StevensShape of You