The Reckless Oath We Made by @bryngreenwood 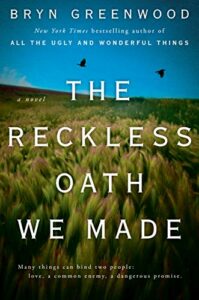 Zhorzha Trego (Zee) is a drug mule whose life is a runaway train about to fall off a cliff.  She’s got no job, no home, an invalid hoarder mother and a gullible sister with not much for common sense.  Her nephew, Marcus, is the bright spot in her life.  She’s also got this stalker, who fancies himself a knight, speaks Middle English and calls her Lady Zhorzha.

Gentry Frank is a literal knight with a kind heart, armor, and swords hanging on his bedroom wall.  He has sworn himself as Zee’s protector and champion.  He is autistic and this is what the voices in his head have told him he must do.   Zee is nobody’s princess and Gentry has a very carefully constructed existence that is about to be shattered into a million pieces.

Zee’s sister, LaReigne, is kidnapped as two prisoners that she was mentoring escape from the prison.  The police have lots of questions but no answers.  Hence, Zee decides that she’s going to find LaReigne herself bringing Gentry and a few of his friends along for the ride.  Except even the best laid plans can go to hell real fast and that’s exactly what happens here.

The Reckless Oath We Made does not have a fixed point of view.  As a matter of fact, it jumps from character to character so you know what each person is thinking.  I found that aspect interesting.  Gentry speaks Middle English through 98% of the book and that did not bother me at all.  I found it lyrical in a way.  These characters are still haunting my thoughts.  This is NOT a traditional love story – make no mistake – this IS a love story.  Two unlikely people fill a void in each other in a way that no one else can because the “see” each other.

Bryn Greenwood is not one for picking the easy light subjects.  What she will give you is a compelling read with complicated characters that don’t fit easily in the usual boxes.

A provocative love story between a tough Kansas woman on a crooked path to redemption and her unlikeliest of champions, from the New York Times bestselling author of All the Ugly and Wonderful Things.

Many things can bind two people: love, a common enemy, a dangerous promise.

Zee is nobody’s fairy tale princess. Almost six-foot, with a redhead’s temper and a shattered hip, she has a long list of worries: never-ending bills, her beautiful, gullible sister, her five-year-old nephew, her housebound mother, and her drug-dealing boss.

Zee may not be a princess, but Gentry is an actual knight, complete with sword, armor, and a code of honor. Two years ago the voices he hears called him to be Zee’s champion. Both shy and autistic, he’s barely spoken to her since, but he has kept watch, ready to come to her aid.

When an abduction tears Zee’s family apart, she turns to the last person she ever imagined–Gentry–and sets in motion a chain of events that will not only change both of their lives, but bind them to one another forever in one of the most moving and complicated love stories of our time. The Reckless Oath We Made redefines what it means to be heroic, revealing the strength, honor, and power that lie at the heart of love.