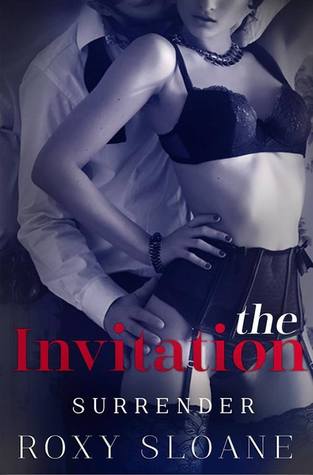 Welcome to your wildest fantasy…

The invitation arrives out of nowhere. No name. No address. Just one simple challenge.

The games are intoxicating, each one more thrilling than the last. And pleasure is the ultimate prize.

He knows my secrets. He sees my darkest desires. He can drive me to ecstasy — and I don’t even know his name.

This is your invitation. Now it’s your turn to decide.

You know that point

in a horror movie…

Hey ya dumb girl, you’re an attorney, DONT GO UP THE STAIRS

Once I got over this hurdle, I really focussed on seeing what this really is.

This is an easy 4 stars. It keeps you there and completely ready I’ll be waiting for the next book with

5 orgasmic stars
I’m laughing at myself to think, I thought The Invitation one was hot. Mere child’s play! Compared to The Invitation two. This one reads like a freaking salacious aphrodisiac!!! The book is orgasmic. Roxy Sloane needs to teach courses on the art of seduction and making wild fantasies come true. (I’m going to have my husband read this book!!) Besides the hotness factor, Roxy Sloane can write! She wrote a delectable titillating story with wonderful characters that have you glued to this book.
We meet back up with Justine. Only now she’s older and making all her dreams come true. She is a successful lawyer on a huge case that can further her career. When we left her in the last book, she had spent an amazing, sexually mind blowing night with her best friend Ashton on their last night at college. He was moving back to England the next day. He had promised to be in touch, as soon as, he got his affairs in order. Well, he never did and Justine never quite got over it. Fast forward to the here and now… Wouldn’t you know it, Ashton is on the opposing side of Justine’s case. This is not the Ashton she remembers. He still gorgeous, refined and polished. But now he’s powerful, cold and calculating. Unanswered questions plague her mind… Why didn’t he call? Did it mean more to me than him? She can’t deny the pull he still has on her. Could her Ashton be hidden underneath his new cool exterior?
While she dealing with Ashton…. A game is being plotted and Justine is the targeted player….
What would you do, if you received a elegant sexy invitation from a stranger for a risque rendezvous, would you take it? Would you throw your inhibitions out the window? Could you surrender and submit? Would you wear a blindfold? It’s a game Justine is willing to play. (I would play too!!) The thrill and rush are just too exhilarating. Even the strongest of women yearn to be completely dominated in the bedroom… who is this mystery man? Is it just a stranger or a friend? could it be Aston? The thrill of not knowing is so intoxicating!
When I got to the end, I was yelling at my kindle….come on!! I need more!! I must read every single thing that Roxy writes. The woman has a beautifully filthy mind and knows how to transfer it to paper.
Share