The Edge of Never, J.A. Redmerski 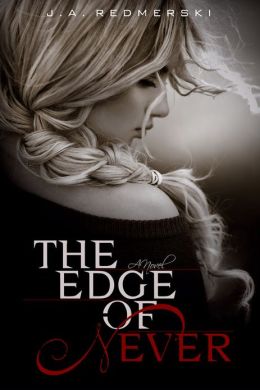 Twenty-year-old Camryn Bennett had always been one to think out-of-the-box, who knew she wanted something more in life than following the same repetitive patterns and growing old with the same repetitive life story. And she thought that her life was going in the right direction until everything fell apart.

Determined not to dwell on the negative and push forward, Camryn is set to move in with her best friend and plans to start a new job. But after an unexpected night at the hottest club in downtown North Carolina, she makes the ultimate decision to leave the only life she’s ever known, far behind.

With a purse, a cell phone and a small bag with a few necessities, Camryn, with absolutely no direction or purpose boards a Greyhound bus alone and sets out to find herself. What she finds is a guy named Andrew Parrish, someone not so very different from her and who harbors his own dark secrets. But Camryn swore never to let down her walls again. And she vowed never to fall in love.

But with Andrew, Camryn finds herself doing a lot of things she never thought she’d do. He shows her what it’s really like to live out-of-the-box and to give in to her deepest, darkest desires. On their sporadic road-trip he becomes the center of her exciting and daring new life, pulling love and lust and emotion out of her in ways she never imagined possible. But will Andrew’s dark secret push them inseparably together, or tear them completely apart?

(Due to sexual content and language, this book is recommended for 17+ – Adult Contemporary Women’s – New Adult Fiction)

Wow, Now I know why everyone is raving.  I literally sobbed so hard that my soul was trembling because of my sobs. Forget Fifty, the scenes in this book were so damn saucy! I mean Hottttt!  I love the character development.  I love how Andrew and Camryn were described, I can completely picture both of them which is why this was so damn Hotttttt!

This story is Sexy!  I would put it at the top of my list for down right best build up to an O ever!

Besides the fact that there was some awesome lovin’  this was a flawless love story.  Two people come together by chance, by fate, or by mere coincidence.  Whatever you want to call it those two needed one each other .

J.A. Radmerski wrote a beautiful novel that I think should move to the top of everyone’s must reads.  You will laugh, you will cry, you my have to fan your face from the steam coming off of the pages, but mostly you will love this.

J.A. Redmerski is the author of THE DARKWOODS TRILOGY, DIRTY EDEN and THE EDGE OF NEVER. She’s a werewolf & zombie fanatic, book addict and a happy hermit obsessed with the Universe and AMC’s THE WALKING DEAD. She lives in North Little Rock, Arkansas with her three children and a Maltese.
Share