The Edge Of Darkness, Melissa Andrea 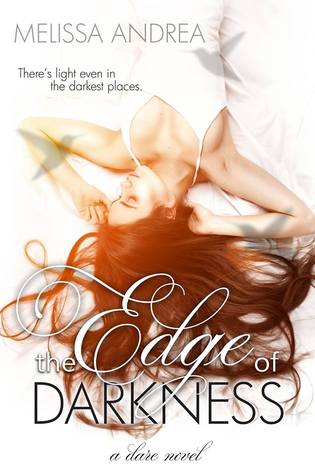 She is forced to give up her chance to be the youngest dancer accepted into Julliard & taking over their high society school by a graceful storm of determination is no longer an option. Instead of dwelling over her loss, she accepts the new future she’s been dealt. In a world as black as hers, there’s no room for bitterness, no time for regret. Sheltered from the outside world, Araya has become suffocated by a life she has no control over. Until Ryland Dare comes crashing into her life.

Like a firecracker, showering her with colorful sparks of freedom, Ryland quickly sweeps Araya away from her grey existence. For the first time since the accident, living in darkness is no longer something Araya wants to do willingly. Unleashed by the shadows of her reminder, being with Ryland, Araya touches light. Together they will learn what it’s like to feel alive for the first time.

At the edge of darkness, a ray of light, will dare them both to HOPE.

I thought I knew what this was about, I watched the trailer, read the blurb, and at 25% in wow, my jaw is dropped and I am totally surprised.  I did not see this story line coming.  To say surprised isn’t even a strong enough word, I was dumbstruck with awe at the carefully crafted way Melissa Andrea laid the pieces.  As the bomb is dropped all of those clues come crashing together in sheer brilliance.

Araya and Ryland have an unmistakable chemistry.  He wants to protect and love her.  He is at war within himself over how he is allowed to feel for her.

My only tiny issue was sometimes it was hard for me to follow who said what. Besides that the pace for this moved perfectly.  It had beautifully written characters and an amazing plot.

You feel for Araya in her home environment.  In so many ways though you feel for Ryland just as equally.  It is not often that as much merit is given to the male character as the female.  This story has both points of view, from Ryland’s and Araya’s but you truly feel like it is both of their story.

I didn’t think I would ever fall in love, but I did and it didn’t matter if he loved me too.  He gave me something much more and there was nothing that I could give him that was half as amazing, but I could love him.  I would love him always and then I would reach beyond that and love him until forever.  My life would never be as bright as it was when he was in it, and that’s what I was going to take with me.”

There is a uniqueness to this story.  It is different from so much out there.  As much as this is about love, it is also about healing, faith and beauty.
http://www.goodreads.com/melissandrea Melissa started reading in high school when she found her mom’s romance book collection and has been hooked on books every since. She became a complete book-a-holic, starting her own collection and improving her reading skills. Most of the time she could finish a book walking around the store, while her mom shopped.

She wrote her first short story in high school for a competition in her writing class. It was a child’s book called ‘Arnold’ – it was about an ant who believed he could do anything. Oh by the way, she won!

She has written many stories since then, but this will be her first YA paranormal/fantasy and the first book she will have published.

She lived in Mesa, Arizona with her husband of six years, and her 3 beautiful daughters. They are her biggest fans and they inspire her everyday. She enjoys spending time with her family, weekend dates with her mom & taking vacations. Hawaii anyone?