The Adventures of Clarissa Hardy by Chloe Gillis Excerpt 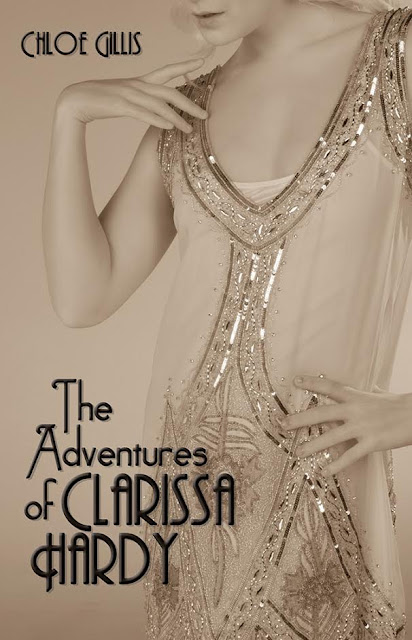 It’s the 1920s and Clarissa Hardy is the very definition of the sometimes scandalous New Woman. The moment Clarissa finds herself free of the shackles of her suffocating virginity, she is keen to explore new territories. Curious and courageous, Clarissa books passage on a luxury liner bound for England. After receiving a titillating education from a fellow libidinous lady traveler, Clarissa disembarks in London and, dressed to the nines in her beaded and fringed fashions, proceeds from adventure to amorous adventure, reveling in delightful debauchery. Clarissa knows exactly what to do with her body. It’s what she learns about her heart that ultimately takes her by surprise!

Kono was standing before her, completely naked.

“I will fuck with you now,” he said. As Eleanora had described in her letter, Margaret stepped forward and took Kono’s large cock in her hands. She squeezed and massaged it, holding it out as Moya stepped forward, bringing it to life with sucks and licks. Kono’s cock was the longest, thickest cock Clarissa had ever seen. He smiled broadly as he approached her.William looked mischievously at Andrew. “What say we try to both go in at once? How’s that, Clarissa? Do you think you could take it? Two cocks in a bush?”

The young men laughed. Clarissa laughed and spread her legs. “Why not?” she said gamely, “Have a try!”

Both on their knees, each man hoisted one of Clarissa’s legs. Clarissa felt herself being stretched as the two cocks were pushed together into her cunt. At last Andrew collapsed in laughter. “Stand back, old chap,” he said to William, “I’ve not had my turn yet. Clarissa, prepare to be fucked once again!” Clarissa smiled up at him. Andrew took both her legs and bent them up over her shoulders, ramming his cock home as he did so. He fucked her with a passion that brought the heat of another climax washing over her again, pumping in and out until he fell over her with a groan.

The plump, blushing orbs were exposed on Clarissa’s lap. “You have a most adorable bottom!” exclaimed Clarissa. She felt them all over, squeezing and pinching, kneading and spreading them, until she herself felt a sudden surge of passion. Slowly, slowly, she ran her index finger down between those sweet mounds until she could feel the wet place and the pulsing clit. Sinking three fingers into Eleanora once again, she fucked her with her fingers until the older woman squirmed and gasped. Clarissa suddenly ceased and withdrew her fingers. Reaching for a small wooden box on the table, she took out the dildo, poured oil on it and inserted it deep into Eleanora. “Be still, Eleanora,” said Clarissa, “I am going to leave it in you while I examine you. I want to see everything about you.”

Who would have thought the antics of a hot little number from the Roaring Twenties would cause me to have to divulge so many specifics about myself! Well, you asked for it. I’m Chloe Gillis, Boston Irish to my core. I was born in Cambridge. I’m an only child. My dad is a history professor at Harvard. My mother, from County Tipperary, was a student of his before she became his wife. She’s an anthropologist and spends half her time digging in peat bogs in Ireland. The other half of her life she spends being wife to my father, flirting with post-docs, and waiting for my husband and me to get busy and give her grandchildren.

Believe me, we’re busy, but children are a ways off. My husband is fifteen years older than me, but judging by his abilities and aptitudes, I think he’ll last awhile. My husband owns a large accounting firm in Boston and bears a remarkable resemblance to Jeffrey Dean Morgan, which is very nice. Oh, this is supposed to be about me, isn’t it!

I am an academic librarian at Boston College. It’s nice because academics are still important there. Anyway, physically, I’m small, with long blonde hair, which I wear in a tight bun when I work. I guess I look a little like Clarissa. In fact, the book flowed so smoothly at times, that I got to thinking that she might be an ancestor, and the story imparted to me by some sort of genetic memory.

My husband and I live in a vintage Victorian in Cambridge not far from Harvard Square with an Irish wolfhound, a French bulldog, and three cats. I know, I know. We’re reaching critical mass in the city pet department, but they add a lot to our lives, which are really quite regimented. The worlds of accounting and library science couldn’t be more disciplined, organized, or, frankly, dull.

I think Clarissa called to me from the quiet of the stacks. Sitting at my desk, staring blankly down the dim hallways of books, or into the depths of my screen saver, which is a picture of me with my mother, digging in the peat in Ireland, I daydream about meeting my husband back at our house later in the evening. I picture myself going into the house. He’s already at home, and he takes me around the waist with his big hands, pins me against the wall, and reaches up under my skirt.

Maybe it’s the intellectual order of our jobs, binding our libido every day, that makes us give in to our more corporeal urges when we’re alone. At any rate, one daydream leads to another and so Clarissa and her adventures were born. She just took it farther than we ever have!