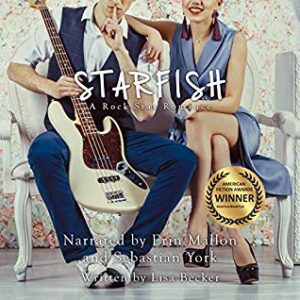 Marin is offered an internship with a public relations firm that is a coveted position – however, her “assignment” isn’t what she was expecting.

Brad Osterhouser and the rock bank Kings Quarters is definitely not what she was expecting.  But there are often things in your life that you aren’t expecting that turn out to be one of the best turn of events in your life.

Brad and Marin aren’t your typical rockstar romance couple.  And that’s what made me like this book so much!  Their relationship starts as friends and slowly turns into more.  It’s a slow burn romance but the wait is soooo worth it!

Narration by Erin Mallon and Sebastian York is always top-notch and once again I think Sebastian York makes a rock star sound super sexy!  His voice was made for the rock star trope in my opinion!

“I found the story to be sweet and entertaining as well as funny and suspenseful at times. And when you learn why it’s called Starfish you will be smiling with me” (I Scream Books Blog)

Ambitious graduate Marin Collins accepts a four-month internship at a prestigious public relations firm to work on a tech account, but her plans are derailed when she’s assigned to go on the road with touring rock band Kings Quarters, hailed by Rolling Stone as the next big thing.
Enter Brad Osterhauser, the reluctant rock star who would rather be coding computer games than penning Grammy-nominated songs.
Traveling by bus, city to city with a group of practical joking bandmates and a greedy manager, Marin and Brad forge a friendship and forbidden romance over a shared love of Seinfeld episodes, stolen moments, and Red Vines.
But when Marin’s accused of betraying her company and the band, will Brad come to her defense or believe she was disloyal to him for the sake of her career?
Told in alternating perspectives of Marin and Brad, Starfish is a contemporary romance of unexpected love, the redemptive power of music, and hogging the bed