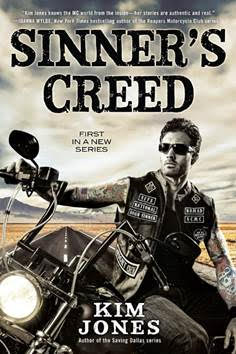 by Kim Jones
First in a new series—welcome to the Sinner’s Creed Motorcycle Club, where hard bodies and hot leather are made for each other, and love gone wrong is the most irresistible of all…

“I was the demon-possessed monster and she was the innocent, naïve angel. But none of that matters. She asks, I give and right now, I’ll kill anyone who tries to stop me from giving this woman what she wants—me.” Dirk lives in the shadows—performing hits, maintaining order, and upholding the no-holds-barred legacy of the Sinner’s Creed Motorcycle Club. A nomad with a restless spirit and a cold heart, the open road is his world. One of the few constants in his life: his desire for the one woman who has consumed his thoughts for years.Saylor Samson grew up far from the harshness of Dirk’s world. But ever since she was seventeen she’s been drawn to this dark and mysterious man who always seemed to show up just when she needed him.After years of fated encounters, he’s back. This time he’s taking her. This time she’s ready for the ride. But just when the darkness in Dirk’s life begins to fade, Saylor reveals a secret that puts them both to the ultimate test. Now, Dirk has to make a decision: submit to his destiny with the MC, or choose his own.

I went to bed cursing Kim Jones last night because she isn’t my friend on facebook. I wanted to reach out to her and scream why!!! No that’s no right, I wanted to tell her I was broken. I wanted her to tell me it was all make-believe and to not be upset. I wanted, no I needed solace.

Kim Jones writes on a completely new level, from the Kim Jones I’ve read in the past, and although I’ve enjoyed her previous work, this by far is superb. But, be prepared, she will gut you in this story.

This is Dirks story (Male POV) a member of Sinners Creed MC. It’s about growing up in a difficult situation, his struggle with believing it made him a monster and if he’s worthy enough for love.

Saylor straight reminds me of Jenny from Forest Gump. She is free spirited and when I picture her, I picture her in a white dress with flowers in her hair. But not just that, I see her through Dirk’s eyes. I see her how he loved her; perfect.

Kim Jones created scenes and moments that will be etched into heart and soul.

I went in blind, I’d have you too. I’m not going to tell you why you’ll break, but be prepared to be the masochistic reader that you are, because as much as you’ll break you’ll also fall in love.

Side note: I’m told by friends of mine that Kim is hysterical. I cracked up at her dedications to her sisters. Also, in the midst of being ripped into pieces by Kim she goes and throws in a line about Harper Sloan that had me giggling and breaking through some of my hurt, because she is funny, even when she’s torturing you.

KIM JONES…I love you! I have read a few MC books and I have liked just a few of them. I am not known to like the “darker” reads that many MC book are known for but this book…HOLY SHIT!

Dirk and Saylor…two souls who needed each other, who found themselves together at the exact moment they needed to be. This is not the “normal” MC book thatI was expecting. Yes, Dirk is one bad ass MOFO and he’s not perfect. Saylor, the innocent girl who “goes for it” with the bad boy biker. But I don’t believe her motives were to be with a bad boy…the connection was there, regardless of how different they were.

This book gutted me at times, not something I was prepared for. I can’t wait for everyone to read it because I need to talk to everyone about how amazing it was! 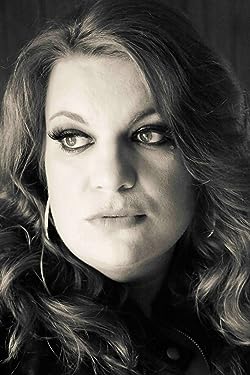 Kim Jones is a writer with big dreams. Inspired by her personal experience inside the MC life, she’s chosen to write biker romances that are authentic–expressing the true meaning of brotherhood and the lifestyle of motorcycle clubs. Kim is the author of the Saving Dallas MC Series and will be releasing Sinner’s Creed, the first book in her second MC series in March 2016. She resides in south Mississippi with her husband, Reggie, two dogs, a cat and a donkey.