Room To Breathe by Nicole Brightman 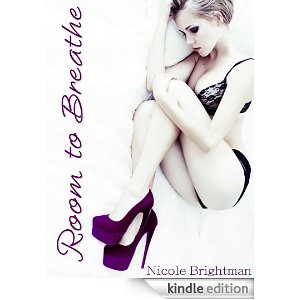 Publication Date: April 14, 2013
Cora Allen moved to the English countryside from America to take care of her dying aunt. She never thought she would still be in the same sleepy town two years later. Cora has dreams for her life that far exceed bartending at her cousin’s pub. She is lost and searching for a new path when her current one collides with Lord Eric Ashford. He is so handsome and charming that she is easily swept up in him. She wants to let down her walls and trust him but his world is full of so much that is strange to her. Should she set her dreams aside for his?Lord Eric Ashford loved his life. It was one filled with excess and women. Lately it had started to feel empty and he looked for a change. On a night where he almost made the biggest mistake of his life he meets Cora Allen. He is drawn to the young American right away. From the first time he saw her he has wanted to touch her, to possess her. She is unlike any other woman in his life. She makes him laugh and surprises him constantly. She has breathed lightness into him he thought he lost forever. But what will she say when she learns the truth about his life?Can these two overcome the pain and loss in their pasts and let each other in? Can they look beyond the differences in their lives? Can they tear down each other’s walls and create a space where they both have room to breathe?
Abby’s Review 3 stars
I liked this book a lot and then I wanted to toss this one aside.  It had me all torn on how I felt.  There are things I love and things I did not like.
I’ll go with the good first….Hot Damn!  Nicole knows how to write some steam.  So much so that whenever I was frustrated with the story, the hot ass scenes had me flipping the pages and kept me intrigued.  Eric and Cora had some super steamy and sweet moments.  It is the highlight of this read
I love when authors will have snippet of something I love in their book.  In this one there was reference to Love Actually and when they fall in love in Portugal.  That just makes me smile when authors do this.
This being set in England gave it a unique and romantic feel.  The way the scenes were set in my imagination was a nice surprise.  Heck I even want to go get a spot of Tea with a splash of milk.
Some of my frustration came from Cora.  First this girl is living in England for 18 months but she has made zero friends.  She quickly walked away from her cousin and I got the feeling that she did not value friendship and family that much.  Have you ever watched that show, Locked Up Abroad?  I felt like Cora would be the one easily convinced.   There were times she was so naive and I thought this girl is going to sell her soul to the devil.  I did feel that it had a pretty woman prostitution romance feel to it.
I kept going back and forth on if I liked Cora or not and if she was just naive.  When I finished the book I still was not able to completely make up my mind.  Perhaps it was my mood, who knows, I think this is one you will have to pick up to form your own opinion.