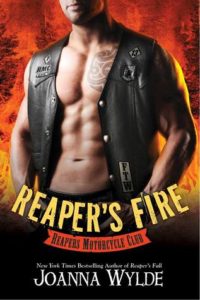 I’ve lived by those words my whole life—assumed I’d die by them, too, and I never had a problem with that. My Reaper brothers took my back and I took theirs and it was enough. Then I met her. Tinker Garrett. She’s beautiful, she’s loyal, and she works so damned hard it scares me sometimes . . . She deserves a good man—one better than me. I can’t take her yet because the club still needs me. There’s another woman, another job, another fight just ahead.

Now she’ll learn I’ve been lying to her all along. None of it’s real. Not my name, not my job, not even the clothes I wear. She thinks I’m nice. She pretends we’re just friends, that I’ve still got a soul . . . Mine’s been dead for years. Now I’m on fire for this woman, and a man can only burn for so long before he destroys everything around him.

I’m coming for you, Tinker.

STEPHANIE’S 4 Stressed Out, Heart Broken and then Repaired Stars

Joanna Wylde’s Reaper’s series is awesome. It is the perfect combination of an MC (Motorcycle Club) series. It has grit, “Old Ladies”, illegal activities, “club business”, sex and more sex. Within the structure ofthe MC Club lies loyalty. Their bonds are strong. Some say stronger than blood. They will go to the wall, to prison or even the ‘ground’ for a brother.

Reaper’s Fire is much different than the other books in the Reaper’s Series. First, I must say that the prologue was amazing. It was heartbreaking and gut wrenching. Talk about a sucker punch! It was beautifully written. This story is about Gage & Tinker.

Tinker has suffered a terrible loss and left Seattle to return back to her hometown of Hallies Falls. Besides her loss she is faced with caring for her dad after mom passed away suddenly from a car accident. She not only cares for her dad but is trying to keep up with his apartment building and run her mother’s store ‘Tinker’sTeahouse, Antiques & Fine Chocolates’, while running her own business as a candy maker.

Enter Gage who answers Tinker’s ad for a handyman. This will provide him with a cover while living under the alias name of Cooper Romero. Gage is sent to infiltrate the local Nighthawk Raiders MC Club. The Reapers strongly suspect they are skimming profits owed to them. Gage infiltrates his way into the MC through Talia, sister of the Nighthawks president. Talia is despicable, heartless and cruel.

The attraction and chemistry between Gage and Tinker is off the hook, but Gage can’t blow his cover. And there is no way that Tinker would take a man who is already spoken for. Tinker has no problem expressing herself in this area. She is a strong and outspoken woman.

Talia makes herself clear – she is “with” Gage (Cooper). I actually feel sorry for Gage because he feels such a connection to Tinker and is stuck with Talia.

The other main feature of the story is an event that happened in real life. It is the 2015 wildfire season in Washington State. The author was directly impacted by the fires and incorporated it into the story. At times I felt like I too was in the fires. Her description of the events happening all around the state sets the scene. Towns burning down, farmers releasing livestock that they could not take with them and hoping for the best. And so much more. It is overwhelming at times.

The story continues and the Reaper’s step up. Picnic, Painter, Horse & Ruger all make an appearance. I was left with many emotions. Fatigue from all of the stress of the fires, sadness over losses and anger over parole violations. The epilogue was not quite what I expected mainly because of the prologue, but it completed Gage & Tinker’s story.

I love the Reaper’s Series and highly recommend it. This book is a standalone but I would definitely recommend starting at the beginning with Reaper’s Property. As I said it is not necessary but it would really giveyou the feel, the love that is The Reaper’s MC !