????? ?? ???????, by International best-selling author Jessica Ruben, is live! This is a new enemies-to-lovers, arranged-marriage, stand-alone romance—with a Mafia twist, that you won’t want to miss! 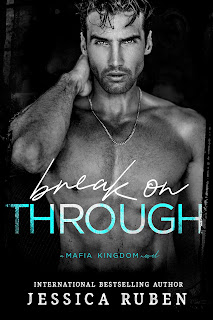 Break on Through is a stand-alone in the Sex.Rock.Mafia series. Set in the Mafia world. The men are manly, dominating, strong and in very much “in charge.” The story is a roller coaster of emotions and intensity. Jessica Ruben’s writing will have you picturing the rich cultures and traditions laced throughout the book. Honor, loyalty and family will all be tested.

Leo has been betrayed in the worse kind of way. He finds himself thousands of miles away from Albania with no home, no fiancée and no business. He does however have luck. And luck leads him to connect with other Albanians who introduce him to Nico and Darius – heads of the Shqiptare (Albanian) Mafia. He seeks revenge and they want to help their “brother” in getting it.

I work and live and demand respect because if I don’t demand it, I will never get it.

Talia is focused and goal oriented. She has worked too hard to give up her dream of playing cello for the New York Philharmonic. Classes at NYU and lessons have not only left her short on cash but short on time as she must focus all of her mind, body and soul on her music. She may seem stuck-up but she is strong minded and determined to get what she has worked her whole life for. Accepting money for marriage was not an easy choice. Finding out her husband was Leo did not go over well.

It starts out with many misconceptions and misunderstandings. There is a push and pull between Leo and Talia. They both have tempers. But, slowly Leo and Talia develop a friendship and then more. Each one having to give and take in ways they are not accustomed to.

Talia is sincere and she has some tough choices to make. Leo is fighting against his natural propensity to keep women emotionally at bay. He is focused on his revenge. They fall into a beautiful and natural rhythm that leads them to love. Their chemistry is off-the-charts. Leo is so intense, confident and smoking hot! Talia too is confident and strong willed.

Somehow, even with our forced marriage and her big mouth, her tough nature and sharp wit, and despite the fact that she is literally nothing like what I thought I liked in a woman, she makes me happy.

Jessica Ruben writes such beautiful stories! They will have your heart thumping all over the place and Break On Through is no exception! It is packed with emotion, anxiety and sexual tension.

Jessica Ruben wow’d me with her debut Rising (Vincent & Eve). She followed it up with Reckoning and Redemption. The Vincent & Eve trilogy set the bar high. I have been excited watching the Mafia series come to life.

There are cameos from Light My Fire, and Love Her Madly. Although the series is interconnected I never felt like I was missing anything. I really loved it. And Vincent & Eve fans lookout for a few “mentions” and a run-in with a shady character. Ironically there is a “V&E” sneak peek at the end and he is in the scene – yikes!

Break on Through is Book #3 in the Mafia Kingdom series.  Are they interconnected?  Yes.  Can you read them as standalone?  Absolutely.  Though I get such a kick out of the cameos, so I’m glad that I’ve read them all.

Talia is single-minded with a laser-sharp focus on ONE thing – her cello.  It is her life’s blood and every sacrifice, every dollar, every minute she has spent in furtherance of that dream has been worth it.  Finding herself with few resources, she is made an offer, one that she can’t afford to refuse.  Little did she know that she’d have to dance with the devil.  A very sexy, very dangerous devil who also happens to be her husband.

Leo is a man betrayed by those he trusted.  Finding himself far from home, he must find a new family.  One that will help him achieve his ultimate goal.  The need for satisfaction of the deep burning thirst for revenge that burns within him is the reason why he breathes.  Now he’s handed the perfect opportunity and it’s not going the way he planned.  His wife is about to learn that he is the kind of man that doesn’t play games.

A marriage that is made with a blood oath is not an ideal way to start a relationship but here they are both in it.  Neither one expects friendship but they find it.  Neither one expects the attraction between them, but it is undeniable.  Lies and secrets have no place in a marriage.  Unfortunately, it brings Leo back to square one and destroys the fragile trust between them.  Can they find their way back to each other despite the odds being against it?

Jessica Ruben has a way of bringing us into the world of the Shqiptare.  It’s almost like she has firsthand experience.  I’m here for it.  She has a way of crafting a story that is both emotional and entertaining with plenty of steam and compelling characters.  Break on Through is no exception.

“Break On Through is lush, vivid and raw! A fresh take on marriage of convenience that grabbed me from page one. Betrayal, lies, secrets, revenge and off the charts chemistry….Talia and Leo are unputdownable!” – Chelé 4 The Love of BooksBlurb

Talia:
My only goal in life is to play the cello in a world-famous orchestra. Unfortunately, education, lessons, and connections don’t come cheap. So, when the most notorious Mafia boss in New York City offers me millions to marry one of his men, I have two choices: take the money and follow my dreams, or risk death. I choose to take the money. But if I had known who my husband would be, I would have picked death. Leo might be gorgeous and lethal, but he has never met a woman who refuses to bow.
Leo:
After being pushed out of my country, I lost my woman, my business, and my life. The streets of New York City are dangerous but nothing compared to the wrath growing within me. Joining the Mafia is a natural progression, especially when they help quench my thirst for revenge. When the boss offers me a marriage that will help me reach vengeance, I jump at the chance. I figure she’ll be a sweet, quiet girl …Not the stuck-up musician from the club. She thinks she can always get the last word, but I’m on a warpath that she can’t derail. She can either fall in line or fall into pieces.