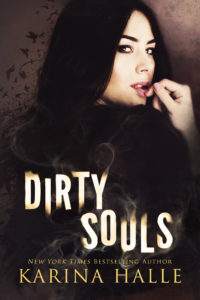 Violet McQueen has always been a sensitive soul. Troubled and misunderstood, she never realized her place in the world, nor her true potential…until she met Vicente Bernal.

From birth, Vicente Bernal has always known his place in the world – he’s been groomed to be a ruthless king. Yet for a man whose soul has become morally bankrupt, it’s only through Violet he’s realizing the worth of someone’s heart.

But at what cost?

With a deadly game set in motion taking them from the stark deserts of California to the steamy jungles of Mexico, Violet and Vicente’s forbidden relationship will be put to the test. Boundaries will be pushed, lines will be crossed and souls will get very, very dirty.

Because how do you choose between blood and love when both might get you killed?

Karina has really poured her heart into delivering us this novel.   More of the characters we grown to love and some we hate are back. This is the conclusion to Blackhearts.  This can’t be read has a standalone. This picks up right where Blackhearts left off.  It’s so freaking good!

Javier Bernal is all about getting his revenge on Camden and Elle McQueen but will he succeed? Who will come out on top? Javier has been festering all his betrayal for 20 years against the McQueen lies and secrets.  The ghost that haunts their past all comes crumbling down. Revenge is a scary thing. Who’s soul needs saving?  With lies and secrets and the past and future all at stake, with Voilet being used as pawn in this game of vengeance.
Javier Bernal is crazier than ever!  He will stop at nothing but being the head of the Mexican cartel will he be able to stay on top? Who will betray him? I loved Vicent and Violet’s characters.  They became stronger than they were. Omg I really couldn’t get enough of them!  Hopefully this is isn’t the end.

What a wild ride this has been.  It’s dark, sexy and totally took me by surprise with all the twists.  Vincent and Violet’s love story isn’t your typical story but it’s an Epic Love story that will have you thinking about it.