#Review ~~ You Deserve Each Other by Sarah Hogle 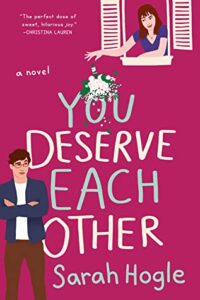 You Deserve Each Other

I love finding a new author and an original storyline.  These two characters, Naomi and Nicholas are engaged to be married but the spark just isn’t there anymore.  And neither wants to be the one to pull the trigger to end the engagement…bring on the silliness!

This book had me laughing out loud at the antics and banter between these two.  One minute they wanted to strangle each other and the next they almost couldn’t stop laughing at each other’s tricks to annoy the other! Their antics were unique, quirky and had me chuckling, page after page.

In the midst of it all, they find a new relationship and it’s beautiful and sweet and sexy to watch it unfold.

This book is a rom-com, it’s a lovers to enemies to lovers, and second chance romance all mixed together in an utterly hysterical debut book by Sarah Hogle.  I would put it in the same

Naomi Westfield has the perfect fiancé: Nicholas Rose holds doors open for her, remembers her restaurant orders, and comes from the kind of upstanding society family any bride would love to be a part of. They never fight. They’re preparing for their lavish wedding that’s three months away. And she is miserably and utterly sick of him.

Naomi wants out, but there’s a catch: whoever ends the engagement will have to foot the nonrefundable wedding bill. When Naomi discovers that Nicholas, too, has been feigning contentment, the two of them go head-to-head in a battle of pranks, sabotage, and all-out emotional warfare.

But with the countdown looming to the wedding that may or may not come to pass, Naomi finds her resolve slipping. Because now that they have nothing to lose, they’re finally being themselves–and having fun with the last person they expect: each other.

When your nemesis also happens to be your fiancé, happily ever after becomes a lot more complicated in this wickedly funny, lovers-to-enemies-to-lovers romantic comedy debut