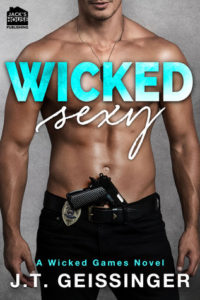 A badass ex-Special Ops officer and a smartass hacker fight a dangerous enemy…and a blistering attraction to each other.

Connor Hughes is an ex-special ops officer, CEO of Metrix Security, and bonafide badass. His private security firm is renowned for its effectiveness. He’s renowned for his lethal precision and iron self-control. But when the former Marine meets a gorgeous young hacker with a mouth as smart as her brain, his control unravels in ways he never could have predicted.

Tabitha West is a genius MIT dropout with a bad attitude, an obsession with Hello Kitty and piercings in unmentionable places. Tabby amuses herself by outwitting the most secure technology systems on the planet. Known in hacker circles as Polaroid due to her photographic memory, she’s as secretive as she is accustomed to working alone. So when Connor decides she’s the only one who can help him catch a cyber criminal intent on taking down one of his clients, she tells him exactly where he can stick it.

But when the cyber criminal turns out to be the Hannibal Lecter of computer crime—and a dark presence from Tabby’s past—Tabby and Connor are drawn into a dangerous game of cat and mouse. They quickly find themselves fighting not only their common enemy, but also an explosive desire that threatens to consume them.

When the stakes are this high and the game this deadly, will falling in love be the most dangerous move of all?

This book was awesome! From the first page to the last, the story grabbed me and held me for one wild ride. Full of mystery, suspense, and scandal, Wicked Sexy ticked off most of my favorite story elements. We met Tabby/Tabitha in JT Geissinger’s Wicked Beautiful. She was the computer genius behind the re-invention of Victoria. In that book, we learned that Tabby is crazy, super smart; has good head on her shoulders; and carries an awful lot of baggage from her past. In Wicked Sexy, we learn just what all of that baggage is.

There are so many sides to Connor and Tabby’s story. One side is how they have to work together to catch a dangerous psychopath hiding on the Internet. There is another side that has them both facing their pasts and how that affects their presents. Then, we see the side of the story where they find themselves attracted to one another. Within those layers, we see just how attracted they are to each other. It isn’t just physical. They are both crazy smart (in different ways), and very passionate. Those characteristics are completely different in Connor and Tabby, and yet, those differences are exactly what elevates the attraction.