Review: Who He Is (FireNine Book #1) by Shanora Williams 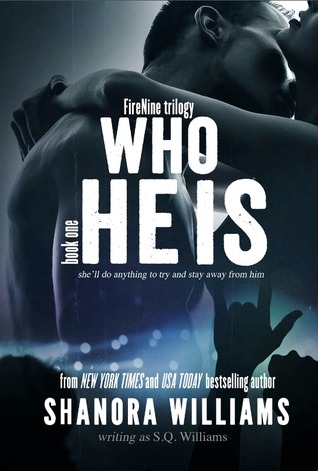 Eliza Smith has never been the one to seek a relationship. She’s never dated a guy in her life, never even hugged a man (outside of her father/manager of the hot and popular rock band, FireNine) but when she decides to spend her summer on tour with the FireNine, it all changes. Eliza really gets to meet Gage Grendel – her former crush from high school and the lead singer of FireNine – and witness sides to him to which she’ll begin to truly despise.

She’ll ignore him, she’ll dislike his ways, she’ll do anything to try and stay away from him until Gage finally gets her to slip up and give in. She agrees on a casual fling with Gage, but soon they’ll both see how the fling will blur into something they can’t control and when it’s finally time for Eliza to go and accomplish her own dreams, she’ll know there’s more she took from Gage than she ever thought possible.

Eliza and Gage!!!  Eliza is super twisted and messed up from her past.  Gage is equally just as messed up.  Neither on of these two are ready for a relationship.  Sometimes in life though, things happen when you don’t expect or want them too.

Gage is sexy, and cocky.  Yet for some reason, this does not feel like your typical bad boy rocker book.  There is something different you get from Gage. He has a vulnerable side that you can’t help but want to be there for him.

Eliza, Is so incredibly guarded.  The way this is written, you don;t always agree with her decisions but you understand them.

Umm Wow, some toe curling moments.  I love it when a book can turn kisses and touches into something so incredibly sexy!!!

Shanora Williams hit a home run with this series, this is one that you will be anxious for the next one to be published!

New York Times & USA Today Best Selling author Shanora Williams considers herself one of the wondrous, down-to-earth authors who’s all about romance and the paranormal… but of course she always makes room for the many other genres out there. She was born and raised in North Carolina but plans on taking trips all around the world as she grows in age.
She’s a huge lover of Starbucks and a big kid when it comes to Haribo Gummy Bears. If she could swim in Coca-Cola she would. She’s a very avid reader and a fan of many others independent authors.