Review ~~ Watch Me by Cynthia Eden 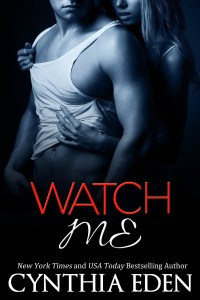 He was hired to protect her.

Watching gorgeous Gwen Hawthorne wasn’t a hard job—but it certainly was tempting. Chance Valentine had tried to keep his distance from the sexy socialite for years, but when her father hired him to keep watch on her—as a twenty-four, seven bodyguard—Chance knew his control was about to be pushed to the limit.

He’d never wanted another woman the way he desired her. Hot. Intense. Consuming. Being so close to Gwen, Chance knew that he wouldn’t be able to resist her. So he gave into his need, her need, and he took them both to the edge of a dark and consuming desire.

But Chance soon realizes that he isn’t the only one watching Gwen. Someone else is out there, a stalker who won’t rest until Gwen is destroyed. Every day, every moment…Gwen is in danger. And Chance knows that if he can’t unmask the stalker, then he may just lose the only woman he has ever loved.

Watch Me by Cynthia Eden is the first book in her brand new “Dark Obsession” series and its definitely named properly.

Chance Valentine is the owner of a personal security company who, in the past, was Gwen Hawthorne’s bodyguard hired by her father.  Things heated up between the two and Chance walked away from Gwen.  Since then, Gwen has has a slue of bodyguards that she’s managed to evade.  But this time, she needs someone her father knows for certain she will never turn away.  Gwen is being stalked and its becoming more dangerous by the hour.  Will Hawthorne, Gwen’s father, picks up the phone and calls Chance to make sure his daughter is kept out of harms way and especially away from Ethan, who is Gwen’s ex-boyfiend with a REALLY bad temper.  They also suspect that Ethan is the one who is actually doing the stalking.  They need to catch him now and their time seems to be running out.
I thought this was a great story full of action and not a lot of down time or “filler” as I like to call it.  It’s a classic “Who Dun It” read that honestly, had my mind spinning (in a good way) with Eden’s twists and turns in the last few chapters.  I actually at one point screamed at my kindle “OH MY GOD- WHO IS IT?!?!?!”.
Cynthia Eden introduces us to lots of characters that Im assuming we will see more of in her next releases of her “Dark Obsession” series.  WANT ME will be releasing this month and Im VERY Excited for it having read WATCH ME.
4 out of 5 BLUSHES
Share