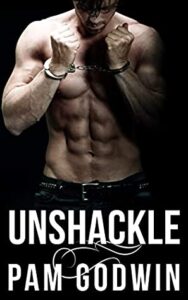 Warning: this book is NOT for the faint at heart. It is a dark romance and contains many triggers!

The Freedom Fighters are at it again. Their vigilante team is infiltrating La Rocha Cartel, the most aggressive, most organized, most violent cartel in existence. All to rescue Vera Gomez, sister of Tula Gomez.

She was an impossible possibility in the flesh.

Luke Sanch is a former captive and understands what is needed to be done as he steps back into the dark and depraved world of human trafficking. He is smart, charming and lethal. He will do whatever it takes to rescue Vera and any other captives including sacrificing himself.

He was heat and virility, fury and stamina….

Bad timing and poor choices have put Vera Gomez where she is. Can she be redeemed? There are many layers to Vera and many twists and turns in her story.

Pam Godwin continues to push the limits as the Deliver series continues with book #7, Unshackle. Although it is recommended to read the series in order, Unshackle could stand on its own. But then you will miss out on the brilliance of Pam’s outstanding writing!

Although there was not a shortage of uncomfortable and cringe worthy scenes, I did find Unshackle to be the tamest in the series. Viral, strong, dominant men with equally strong and beautiful women are present throughout Unshackle. Truly an amazing series for the #DarkRomance lover!

I cannot wait for Dominate!

She made him feel restless and possessive, like an alien predator trapped in his skin. 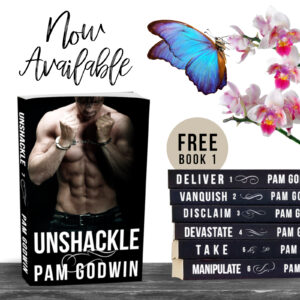 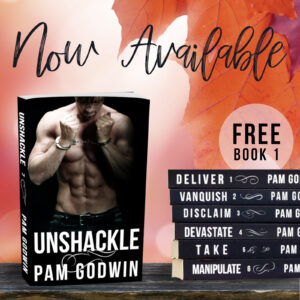 Pam Godwin (Goodreads Author)
No woman can resist Luke Sanch’s chiseled features, honed physique, auburn hair, and intense green eyes.
While deadly in combat, he’s an indomitable weapon in bed. He can coax an explosive release with only his mouth and annihilate with insidious, mind-blowing pleasure.

When he infiltrates La Rocha Cartel, he must seduce Vera Gomez to determine whether to rescue her.
Or kill her.

Nothing can distract his icy, lethal focus.
Except the cartel’s most feral captive.

The nameless, raven-haired beauty is his key to dismantling Vera Gomez. But the ferocious little fighter challenges him at every turn and unknowingly battles her way into his heart.
A battle that delivers him, physically and emotionally, into shackles.