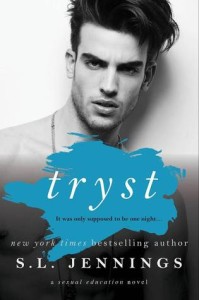 From the author of Taint, comes this steamy novel of a happily married couple who decides to take a walk on the wild side in order to add spice to their sex life—but end up in a situation that neither could have ever bargained for.

Heidi DuCane is a tough-as-nails publicist with a passion for success and her husband Tucker. While they’re polar opposites, what they do have in common is a fierce love and commitment to each other. But their relationship—in and out of the bedroom—will be put to the ultimate test.

Rock superstar Ransom Reed is every woman’s fantasy, including Heidi’s. When she meets Ransom, she shares a wild night with him where Heidi gets to play—and Tucker watches, and enjoys, the pleasure Ransom gives Heidi. Though Tucker was a willing participant, Heidi still can’t help reeling with guilt. There’s no doubt that she loves her husband. While Tucker is the perfect lover—generous, attentive and gentle—she needs much more. She needs the mind-blowing ecstasy Ransom offers.

Tucker isn’t blind to the fact that Heidi has unconventional needs which he can’t satisfy. He loves his wife and will do anything to please her The night he watched her and Ransom was so scorching hot that Tucker can’t stop thinking about it. He decides he wants to join Ransom in pleasing Heidi. But as Tucker and Heidi soon realize, it’s not just the sex that is enticing. Heidi felt something within her awaken, and she felt so deliciously sated and loved by both men. Tucker felt it too, and he finds it impossible not to want that feeling again.

Ransom and Tucker satisfy a need within Heidi. And now that she’s had them, she can never go back to the way things were before. 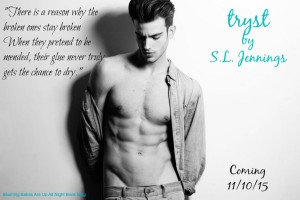 SL Jennings…I love you. You have brought me so many characters that I love, Justice Drake, Dorian, Nico, Blaine and Dominci and now Ransom.

Now that that’s out of the way…Tryst. This book was perfect for me. SL Jennings took a scenario that may (or may not) have crept into a few couple’s fantasies. But it’s just that a fantasy…right?

Well not for Tucker and Heidi. Heidi has the “list”, you know the one with the “free pass”, but low and behold, – she meets one of the men on her list and for just one night the fantasy comes true.

Tucker – the man who has brought Heidi back from lowest moment in her esistence is the best husband out there… He loves her with all his heart; he just wants her to be happy. But in one certain part of their life, he’s unable to fulfill her needs.

In comes Ransom, the quintessential rock star. He’s out of control and in need of a publicist. There is only one person fit for this job, Heidi.

Heidi – the high powered publicist who was the only one who could save the reputation of Justice Drake. She talks no prisoners. She’s a strong, fierce woman who made me smile and laugh out load a few times.

“…I am used to dealing with assholes…Hello, Justice Drake anyone?”

Tucker and Heidi meet and the sparks immediately fly. Tucker feel the electricity and encourages Heidi’s ultimate fantasy to come true.  But will one night be enough? Has her one night fantasy helped her marriage or ruined it?

Who but Justice Drake is the man to help this marriage heal. The expert that is Justice ”to the rescue”. Tucker, Ransom and Heidi head to Oasis to get Ransom out of the public eye, while trying to repair Heidi and Tuckers marriage. While there they begin to see that the one night wasn’t enough, but how far can they or should they go?

Holy crap this book is HOT! On fire, burning, inferno HOT! But it’s not just the hotness, the story line is unique and grabbed me and I couldn’t stop. There are a few twists and turns I was blown away by.

I fell asleep reading and began reading the moment I woke up, read during 1/2 time at my daughter’s soccer game and I then encouraged my kids to play on the playground even longer than they wanted to…I HAD to finish this book and SL Jennings did not disappoint!

An ARC was received from the publisher for an honest review. 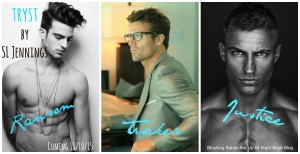