Review ~~ Touching Down by Nicole Williams 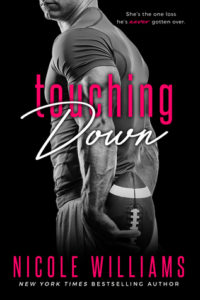 by Nicole Williams
The whole world might be in love with him. But all he’s ever loved is her.

Grant Turner’s name is synonymous with football. The fans and media can’t get enough of the player known as The Invincible Man, a nickname he earned while growing up in one of the toughest neighborhoods in the country and the nickname he’s kept by being one of the best players in professional football today. No one can take him down. He’s unstoppable.

But even a suit of armor has its weak point, and Grant’s has always been Ryan Hale.

They were a couple of kids when they fell in love, and just when it looked like the happy ending neither expected was within reach, Ryan disappeared. No explanations. No good-byes.

Grant coped by throwing himself into the game for seven years, and he’s finally moved on. Or so he thinks.

When she walks back into his life, all of those feelings come crashing back, despite the warnings in his head that tell him she’ll leave him again. Grant can withstand the league’s toughest defensive line, but he’s always been weak where she’s concerned.

No man can take Grant Turner down.

But one woman certainly can.

Wow! What a great story! Nicole Williams knows how to tug at your heart. Her writing is diverse. I fell in love with Jude in the “Crash” series and had my heart obliterated when I read “Collard”.  And now there is a new man in town…Grant Turner!

Grant Turner and Ryan Hale were thrown together by life’s circumstances. They survived growing up in one of the poorest and harshest cities around called the Clink.

Ryan’s mom, a drug addict. Grant’s dad, an alcoholic. They had each other and the wonderful Aunt May, an elderly woman who provided a warm meal or a safe haven when there was no other safe place for the kids in the Clink. Grant & Ryan’s bond was built on their struggle to survive.

Despite Grant and Ryan’s four year age difference they fell in love. Everything was great until one day Ryan disappears without explanation or even saying good bye to Aunt May. Grant is a college freshman and heartbroken.

Flash forward seven years. Aunt May has passed away and Ryan returns to pay her respects and to see Grant. Grant is now an NFL superstar. He is angry and hurt by Ryan’s sudden disappearance seven years ago and is less than happy to see her.

“I knew leaving the way I did must have hurt him. I knew it had to have confusedand angered and betrayed him….”

Along with Ryan’s return comes answers. Answers to why and how. Que the tissues please…..

Nicole Williams takes us on a journey full of tears, happiness, angst, regret and heartbreak.

I really loved this book! Grant is supportive and invincible just like his NFL nickname. Ryan is resilient, loving and dedicated.