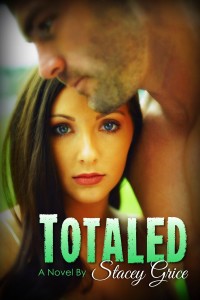 Totaled is a full length (112,000 words) new adult, contemporary romance novel. It is not recommended for readers under the age of 18 due to sexual situations, mature content, and explicit language.

Bree Murphy is stuck. Forced to grow up too fast after the tragic death of her mother, she has little time for any sort of life for herself. Now in her early twenties, she is coming to the realization that she deserves to put herself first.

Drew Dougherty is also stuck, in a state of merely existing. Memories and secrets of the day he lost both of his parents haunt him, forcing him to cope the only way he knows how…by fighting.

When these two worlds collide, hidden truths are revealed and relationships are put to the ultimate test. At a crossroad in their lives, they must decide if taking a risk is worth everything.

Or will their love be…

Totaled was a great start to this series!  Who doesn’t love a super fly and actually sweet MMA fighter with a gorgeous body, beautiful face and an all around GOOD GUY!?
Drew Dougherty is this man!  He’s searching for a new start and the flat tire he gets while driving to nowhere just to get away is the biggest stroke of luck he could have ever asked for.  Hes grateful for what Mick, the stranger who pulled over to help him, has done.  Is in awe of how trusting he is and is humbled by Mick’s relationship he with him.
Bree works for her father’s gym, takes care of her the home she her father and brother Liam share.  She was thrust into that role after her mother passed and hasnt been able to really do the things SHE would love to do.
When Bree and Drew meet, however, it doesnt really go very well, to say the least.  As time goes on, and Drew starts training in the gym, they have much more in common than they ever thought.  A friendship is formed and Im sure you know where it goes…
You just dont know how tormented Drew truly is and he wont discuss anything really about his passed… until he is forced to.  There is a cliffhanger on this book and Ive VERY interested in where Stacey Grice will take us next!!
The story line was good. I felt the writing was a bit choppy at times and a few time lines didnt exactly add up.  I was hoping for more from the characters.  More depth to them so hopefully she’s doing that with her upcoming release TAPPED!  Good Job Stacey!  I liked it!
3 out of 5 Blushes
AMAZON

Stacey Grice is a mother, a wife, a Registered Nurse, and an avid reader. Born and raised in Jacksonville, Florida where she lives with her husband and daughter, she finds inspiration at her job, through frequent trips to the beach, and in the many characters that surround her life.