Review: TIED WITH ME (With Me in Seattle #6) by Kristen Proby 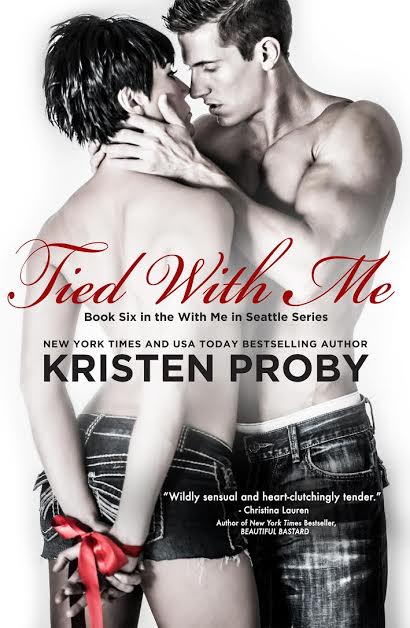 A man whose lifestyle is so different from her own…

Nic Dalton’s cupcake bakery is thriving. She serves both rock stars and locals alike, content with her growing business. But one adventurous night out with her best friend, Bailey, turns her life upside down. She meets a handsome stranger who makes her skin sizzle and her heart race. Their one night together is explosive and unexpected, but when he has to suddenly leave without taking her phone number, Nic resigns herself to never seeing him again.

…What will it take to trust and submit to his every desire?

Matt Montgomery is one of Seattle’s finest. He works hard, loves and protects his family fiercely, and is loyal almost to a fault.

And he has a penchant for bondage.

Matt enjoys the way a woman looks wrapped up in his ropes, and makes no apologies for his preferences. When he meets Nic at a fetish festival, the small, beautiful woman catches his eye, drawing him to her. His one night with her was everything he’s ever looked for in a partner, but is cut short because of a family emergency. Even before he sees her again weeks later, he knows he’ll never get her out of his system.

And he’ll do whatever it takes to make her his.

“Give in to this, Nic. Let me prove to you that I will be one of the best decisions you ever make.” –Matt Montgomery

Before I can review Kristen Proby’s newest installment to the With Me in Seattle series, Tied with Me, I need to come clean. I can’t believe I am going to admit this…I had forgotten that there was a Matt Montgomery. I KNOW!! I am embarrassed to even tell you this. I LOVE this series!! I have read every single one of these books. Some twice!! I haven’t met a Montgomery man I didn’t want for my very own. And I certainly didn’t think I could want one more than I wanted Caleb (he was all kinds of intense yumminess!). Somehow, Matt Montgomery never flashed on my radar. So, imagine my shock and surprise to find that the quietest, least assuming of the Montgomery men turned out to be the hottest one of them all!! (Insert me getting hot and bothered just thinking about him here!!)

In Tied with Me, we get to really know Matt Montgomery. He’s smart, sweet and devoted to his family. He’s yummy delish. He’s a detective.  AND he likes to get kinky in the bedroom!! That’s right! The quietest one of the bunch is also the naughtiest. (My mama always said it’s the quiet ones you have to watch out for!) In Kristen Proby style, we are told the hot story of Matt and Nic. At an “adult” expo, Matt meets Nic, a quiet woman who has been dragged to the event by her best friend. When her BFF pushes Nic to let Matt tie her up as part of a demonstration, Nic comes face to face with a side of herself that she didn’t know existed. She liked being tied up!! When Matt realizes that Nic is into it, he makes her an offer she doesn’t want to refuse.

I love the way Kristen Proby writes. It is fun and easy to read. She tells a great story with interesting characters that always have a little more to them than you initially think. In Tied with Me, we get that and more. Not gonna lie…There is some seriously hot and kinky stuff in the story, but this book is not like some of the more well-known erotica novels out there. I honestly like the level of hotness in Tied with Me more than in those “other books”! I think the way in which Matt introduces Nic to this side of herself is more natural and real. Matt is not a Dom and he doesn’t really want Nic to be his sub, and I liked that.

**Let me say, right now, that if you are not familiar with this series, you MUST finish this review, read Tied with me and then read the rest of the books. They are companion novels, so you don’t have to read them in order. Kristen Proby does an awesome job of overlapping significant details in each novel to give the reader a frame of reference for each book.

Our Reviews for Play With Me/Interview with Will & Meg; Safe With Me KRISTEN PROBY is the USA Today bestselling author of the popular With Me in Seattle series. She has a passion for a good love story and strong characters who love humor and have a strong sense of loyalty and family. Her men are the alpha type—fiercely protective and a bit bossy—and her ladies are fun, strong, and not afraid to stand up for themselves. Kristen spends her days with her muse in the Pacific Northwest. She enjoys coffee, chocolate, and sunshine. And naps. Visit her at KristenProby.com.

Tags: Kristen ProbyMontgomeryTied With MeWith Me In Seattle