#Review~~ The Roommate by Rosie Danan 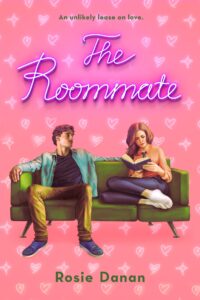 The synopsis grabbed me immediately.  I did enjoy watching Clara and Josh both transform while reading I wanted just a little bit more.

I wasn’t sure if I could imagine Clara being so willing to partake in some of Josh’s suggestions or to find herself in the position of going into business with him so easily but I was able to get past the unsure feeling and enjoyed the interaction between these two characters.

Josh’s profession is a bit daunting for Clara the socialite but they both learn a bit about each other and themselves as the book progresses.  The growth of the characters and their relationship was enjoyable to watch and a bit scandalous to read at times (lots of blushing from both Clara and me, while reading!)

Rosie Danan
House Rules:
Do your own dishes
Knock before entering the bathroom
Never look up your roommate onlineThe Wheatons are infamous among the east coast elite for their lack of impulse control, except for their daughter Clara. She’s the consummate socialite: over-achieving, well-mannered, predictable. But every Wheaton has their weakness. When Clara’s childhood crush invites her to move cross-country, the offer is too much to resist. Unfortunately, it’s also too good to be true.

After a bait-and-switch, Clara finds herself sharing a lease with a charming stranger. Josh might be a bit too perceptive—not to mention handsome—for comfort, but there’s a good chance he and Clara could have survived sharing a summer sublet if she hadn’t looked him up on the Internet…

Once she learns how Josh has made a name for himself, Clara realizes living with him might make her the Wheaton’s most scandalous story yet. His professional prowess inspires her to take tackling the stigma against female desire into her own hands. They may not agree on much, but Josh and Clara both believe women deserve better sex. What they decide to do about it will change both of their lives, and if they’re lucky, they’ll help everyone else get lucky too.