Review ~~ The Return by Nicholas Sparks 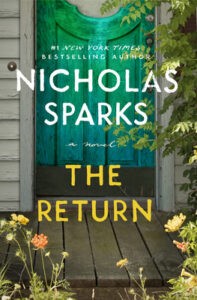 Nicholas Sparks
In the romantic tradition of Dear John and The Lucky One, #1 New York Times bestselling author Nicholas Sparks returns with the story of an injured Navy doctor — and two women whose secrets will change the course of his life.

Trevor Benson never intended to move back to New Bern, NC. But when a mortar blast outside the hospital where he worked as an orthopedic surgeon sent him home from Afghanistan with devastating injuries, the dilapidated cabin he inherited from his grandfather seemed as good a place to regroup as any.
Tending to his grandfather’s beloved bee hives while gearing up for a second stint in medical school, Trevor isn’t prepared to fall in love with a local . . . and yet, from their very first encounter, his connection with Natalie Masterson can’t be ignored. But even as she seems to reciprocate his feelings, she remains frustratingly distant, making Trevor wonder what she’s hiding.

Further complicating his stay in New Bern is the presence of a sullen teenage girl, Callie, who lives in the trailer park down the road from his grandfather’s cabin. Claiming to be 19, she works at the local sundries store and keeps to herself. When he discovers she was once befriended by his grandfather, Trevor hopes Callie can shed light on the mysterious circumstances of his grandfather’s death, but she offers few clues — until a crisis triggers a race that will uncover the true nature of Callie’s past, one more intertwined with the elderly man’s passing than Trevor could ever have anticipated.

In his quest to unravel Natalie and Callie’s secrets, Trevor will learn the true meaning of love and forgiveness . . . and that in life, to move forward, we must often return to the place where it all began.

I’ve been reading Nicholas Sparks for many MANY years. I love his North Carolina backdrops, sweet romantic moments in small towns, broken but somehow incredibly strong and likable heroines, and love-struck heroes! The Return did not disappoint! I loved that the heroine, Natalie, was a deputy sheriff! And the hero, Trevor, is a wounded doctor home from war looking to start his career over again as a psychiatrist since he can no longer operate. I loved watching these two falls for each other.

Natalie is harboring a big secret! At times I felt MAD at her for what seemed like leading Trevor on, but her story was so heartbreaking you couldn’t help but empathize. There are a few twists and turns in the book that I didn’t see coming, and when it all comes together in the end you have what Nicholas Sparks fans love- a beautiful and romantic love story! There is a secondary character- Callie, that has an interesting story, too. I enjoyed watching her secrets come to light while Trevor uncovered her past as well. SO GOOD!!