Review ~~ The Cattery by K.A. Merikan 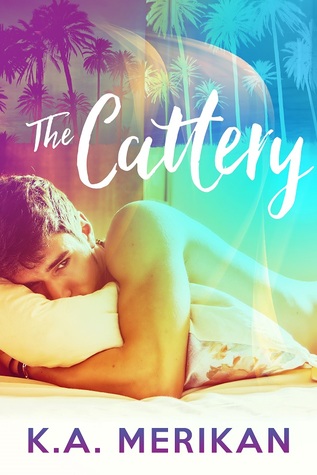 by K.A. Merikan
— Role-playing a cat for six months? You said you’re paying how much? —

Goran’s mouth has no filter, and it’s losing him job after job. Desperate and a week away from being homeless, he finds an offer online that sounds too good to be true. Spending six months in a mansion by the beach in return for a hundred thousand dollars as long as he sticks to the house rules.

This might be the one job where his unruly mouth doesn’t get in the way. After all, saying the wrong thing is impossible… when you’re role-playing a cat.

Meeting all the other guys at the cattery seems to be the icing on the cake, but the inconvenient truth he dishes out turns out to be too much. Goran makes everyone his enemy, but worst of all, Ollie, the prettiest cat of the bunch, the one who’s been in the cattery the longest, and the one who makes Goran’s heart skip a beat.

Ollie’s big blue eyes hold secrets Goran is intent on cracking, but to do so, he will need to learn to bite his tongue and listen. Too bad the pretty blond ice prince is set on getting Goran kicked out of the cattery for good.

DAWN’S 4.25 STAR REVIEW
I will never look at cats the same again! The Cattery by KA Merikan is like nothing I have ever read before. I am so glad I took a chance with it. Dare I say, cat play is fun, kinky and UNIQUE… I never expected to love this book as much as I did. It is written in such a smart and entertaining way. Nothing feels perverse or immoral. Although, it does have some wildly kinky scenes that I won’t soon forget! Meow! There is more to it then just the Cattery and role playing… You will get your kinky fill of collars, furry ears, purring and cat play, as well as, hot kitty sex throughout. But there is also betrayal, friendships, revelations and romance.

When down on his luck Goran comes across a rather interesting and hard to resist job offer, he jumps at the chance. Seems simple enough, act like a cat and live with other “cats” for 6 months in a mansion. All expenses paid. Hmmmm… How hard could that be? It’s a last resort for Goran because his big, fat, unfiltered mouth, always gets him in trouble and fired! Now he desperately needs this job…

Here is were this aberrant story gets so good! Luis is the peculiar owner of The Cattery… He is awkward with humans, so he rather be surrounded and sleep with his “cats.” Besides having a cat fettish, he is rather sweet, kind and generous. There are 5 other guys at The Cattery. All with very different, bold personalities. Yes, all having sex with each other, making this one fun ride. I loved getting to know them all. Can Goran keep his mouth shut and just enjoy being a Cat? Of course not! Adjusting to life in the cattery is definitely different then anything he has experienced and is proving to be a challenge. Having a crush on one of the prettiest yet most overbearing cats, isn’t helping at all. Ollie is one complicated character. He has his own issues that he keeps buried deep inside. To know him is to love him! (This is where the story heats up.) His & Goran’s relationship is down right bitchy and tumultuous… Between the cat fights and fun, a real story and romance develops. The further you get in and the more you get to know the know the guys, the deeper your heart will be invested. It’s not all cat play. Ultimately it’s a beautiful love story that you will devour.