#Review ~~ That Secret Crush (Getting Lucky Series #3) by Meghan Quinn

THAT SECRET CRUSH BY MEGHAN QUINN

BOOK 3 in the Getting Lucky Series

USA Today bestselling author Meghan Quinn brings more humor and heart with the third novel of her Getting Lucky series: a story about breaking curses and laying your heart on the line.

What happens when your secret crush isn’t so secret anymore?

I’ve had feelings for Eve Roberts for as long as I can remember, but because she also happens to be the twin sister of my best friend, Eric, I’ve never acted on my feelings and long ago resigned myself to keeping my crush under wraps.

But after a terrible falling-out with Eric involving a failed restaurant venture and plenty of blame on both sides, I’m back in Port Snow without my best friend and without any direction. But can you guess who’s here? Eve. And my attraction to her is as strong as ever.

As old feelings rush back, Eve and I find ourselves pulled together, whether we like it or not. Lines are crossed, secrets are kept, and we soon discover that the difference between love and friendship may not be so black and white, after all.

Everyone wants that secret crush to love them back…but will I be ready when she does? 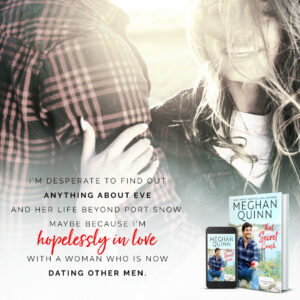 Reid is one of the Knightly brothers (who we have fallen in love with in  3 books!)  That Second Chance

and That Forever Girl

Reid had his dreams come true years ago, opened his restaurant with his best friend to have it taken away.  He finds this out when he’s in New Orleans with his brothers and right after the “curse” was bestowed upon them.  Reid has always had a crush on his best friend, Eric (and co-owner of his de-bunked restaurant) twin sister Eve. It was decided years ago that Reid would NEVER pursue Eve.

Things are changing and it’s unknown if their relationship can weather the storm.  Meghan Quinn gives us a swoony, romantic, funny (thank you Brig) and sweet small town, friends to lovers, best friends sister romance.  The only thing that would have made this book better for me – is if it was released in the summer and I would have read it sitting on the beach. The perfect beach read…I did snuggle up with a warm blanket and read but on the beach would have been even better!