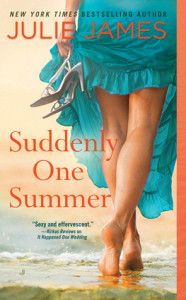 SUDDENLY ONE SUMMER, high-powered divorce attorney Victoria Slade has seen far too much marital misery to try for her own happy ever after.  She prefers casual dating, unless it’s with a guy like her new neighbor, who seems to have a constant parade of women around him.  But once she agrees to take on his sister’s case, she’s as determined to win for her client as ever—even if it means teaming up with the womanizing Ford Dixon.  Only Victoria soon finds that investigative journalist Ford isn’t actually a womanizer at all.  He’s something far more dangerous: intelligent, determined, thoughtful, honest, and incredibly sexy.  Both Ford and Victoria have longstanding reasons to be skeptical of love and commitment, but the more time they spend together, the more they realize that they may have found their elusive happy ending after all.

Victoria and Ford.  She’s a divorce attorney, he’s an investigative journalist for the Chicago Tribune.

She’s a strong willed woman, who has a past that has begun to haunt her. She has a past and a job that doesn’t lead her to believe committed relationships work. He – isn’t that far off the path of “friends with benefits” kind of guy.

They see each other from across a crowded bar and there is the spark, which is quickly extinguished when Ford is approached by a bachelorette party.

This book had an Alice Clayton-WALLBANGER-kind of feel to it.  Neighbors who are not too happy with listening to each other’s goings on, but I don’t want you to think it’s exactly like Wallbanger.

I seriously LAUGHED out LOUD while reading this book.  The back and forth between Ford and Victoria was hysterical.

They join forces to help Ford’s sister and niece.  They may not have started off on the right foot, with their time together, they find they are a good team and even have some seriously HOT sex, but is it just sex or could they be the one person each other has never known existed or ever wanted?

I really enjoyed this book.  It was a fast and fun read for me. Didn’t want to put it down.   Not many authors have the ability to have the sexy, hot fun with laughs thrown in, but Julie James has done it with this book.

Julie James is the author of five previous contemporary novels.  James graduated from the University of Illinois College of Law and clerked for the United States Court of Appeals.  She lives in Chicago with her family.  Connect with Julie online at www.juliejames.com, Facebook.com/JulieJamesFanPage, and www.twitter.com/juljames.