REVIEW ~~ She, the Kingdom by Olivian Pope 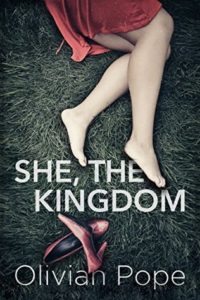 by Olivian Pope
Sex, love, loyalty, and betrayal. Not in that order.

She, The Kingdom – Olivian Pope

This was the strangest book I have read in a while. But there has been a buzz about this debut author and her book all week. When I began, I knew nothing about the book. The blurb did not reveal too much:

Sex, love, loyalty, and betrayal. Not in that order.

Morgan Clarke, divorced single parent and finance director at a small town hospital gets a pink slip after the hospital is taken oven. Enter Maxwell Kingston who provided that pink slip. Max is intense, rich and powerful.

So, I don’t want to ruin the book so I won’t tell you what his proposal is. I will say it is not one that I had read before. I was literally like “huh?” then “seriously!” It was bizarre. I almost stopped, but I pushed through a chapter or so and, it worked. It really, kind of, sort of, worked!

The writing is smooth and flowing. As I said earlier it is not like anything else I have read. With that I say, dive in, get over the “what!” and don’t spoil it for others, hehe….