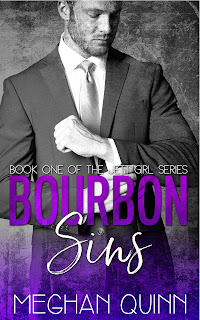 On the streets of New Orleans, sins are committed every night.

My name is Jett Colby and I save tarnished souls.

In the downtown, under the glittery lights of Bourbon Street, I found her in cheap lingerie, flaunting her body for callous men and money.

From the lace of her cheap lingerie, to her garter belt, I knew she had to be saved.
She had to be mine.

Broke and destitute with no way of out, she had no choice but to come to me and into my club.

She had no other choice but to become a Jett Girl.

But see, that’s the thing about this city; you might think that under the dazzling lights and illusion of salvation, she’s the one that needed saving.

When the glitter fades and the dirt is washed away, the one worth saving just might be me.

*Formerly known as Becoming a Jett Girl. Add it to your TBR–> http://bit.ly/2foiqfA

I am new to the Meghan Quinn fandom life.  I have recently begun reading Meghan Quinn and she’s one of my favorite ROM/COM writers but this book has some rom/com in it but more importantly, there is some serious erotica going on!  Holy crap I had no idea!

“He was perfection- fuck me in the ass, all finger huts in the room are weeping, my lady cactus drought is over, panty pudding overload, kind of perfection”.  <— the Meghan Quinn I have loved recently with her LOL moments!

So Bourbon Sins (Formerly becoming a Jett Girl) takes place in New Orleans.  Bars and strip clubs and general debauchery!  Woo Hoo – I am in!

Goldie, a young girl who has fallen on hard times since losing her parents in Hurricane Katrina, has done what needs to be done to survive.  She’s working at a seedy strip club and pretty much-having sex with a married man for money (so yeah – prostituting herself) to make ends meet.  She’s not necessarily unhappy where she is but isn’t really happy with where life has taken her.  Out of options, she does what she has to do.

She is offered an opportunity of a lifetime to come and work at a new club.  The Lafayette club.  One catch, she’ can be taken care of (financially) by the owner of this club, but she must also submit to him…

With her options dwindling, she takes the offer and man of man – shit get’s real!

I loved the other girls, the dynamic they had with each other was nice to see that women can really like each other, be friends and not be so damn catty!

Her “relationship” with Colby Jett is tumultuous, to say the least.  Her relationship with Kace, Jett’s 2nd hand man was pretty intense too!  She’s been warned that Jett doesn’t “do relationships” but Jett’s behavior with Goldie is often more than Jett even though he wanted.   And OMG – the sexy times in this book were – holy shitballs!

“Music and sex were like peanut butter and jelly to me; they belonged together, and you weren’t doing it right until you fucked someone to a musical beat.”

So yeah – the playlist will have you downloading some iTunes for your own little party in your bedroom!!

I look forward to more of this series as Meghan Quinn has left me wondering- what’s next for these characters! And damn it Meghan Quinn…

I WANNA BE A JET GIRL! 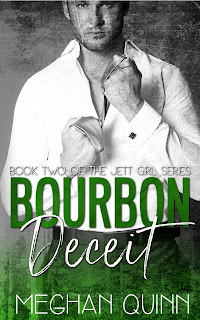 The walls of my club hold many secrets. Depravity. Sin. Justice.

Come in; debauchery can be yours for the cost of a lap dance and a night of pleasure.

And I own every last part of it.
But she’s my weakness, and thankfully she followed me through the insolvent streets of New Orleans, giving me her loyalty and her heart.
My desire for her dominates my every thought, but my broken past could destroy us.
There are people trying to bring me down.
Two malicious men stand in the way of what I want: to own it all.
It’s either Lot 17 or Goldie, my Jett Girl.
I have to make a choice and for once, it won’t be easy.
*Formerly known as Being a Jett Girl. Add it to your TBR–> http://bit.ly/2xhO31t 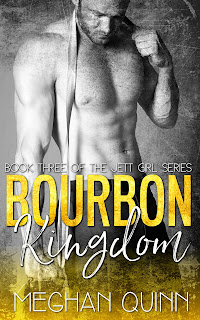 Under the neon lights of Bourbon, money is everything.
Justice, faith, and power. They’re the key to my empire and she holds them all in the palm of her hand. Falling for her was a mistake; she stole my heart and consumed me. I was addicted, and she left me weak and vulnerable to my enemies.
They’re everywhere.
Now she’s gone, turning to my enemy’s business partner; the man I’ve hated my entire life. She said she’s protecting me. She said it won’t be forever.
But how can I believe her?
Lies, deceit, and deception. They’re the sins driving us apart.
In a city that never sleeps—in a place where scandal hides behind every dark corner, my Jett girl might never be mine again.
*Formerly known as Forever a Jett Girl. Add it to your TBR–> http://bit.ly/2wLsFgL 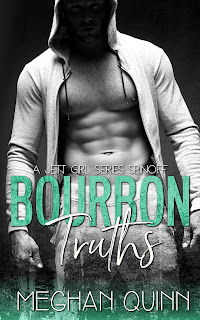 Every choice you make in life comes with a consequence.

I was once on top, I was the professional boxer to be afraid of. I had everything I could possibly hope for. I was happy, satisfied, content . . . until one night.

I killed a man. The sound, the blood, the stagnant air, it’s forever imprinted in my mind and now dictates the way I live my life.

Desolate with nothing but my penance to pay, I didn’t expect to have my world flipped upside down when Lyla seductively strutted into my life.

But I don’t deserve her.

This is my story of repentance.

*Formerly known as Repentance. Add it to your TBR–> http://bit.ly/2xtvpTx
About the Author:

Born in New York and raised in Southern California, Meghan has grown into a sassy, peanut butter eating, blonde haired swearing, animal hoarding lady. She is known to bust out and dance if “It’s Raining Men” starts beating through the air and heaven forbid you get a margarita in her, protect your legs because they may be humped.
Once she started commuting for an hour and twenty minutes every day to work for three years, she began to have conversations play in her head, real life, deep male voices and dainty lady coos kind of conversations. Perturbed and confused, she decided to either see a therapist about the hot and steamy voices running through her head or start writing them down. She decided to go with the cheaper option and started writing… enter her first novel, Caught Looking.
Now you can find the spicy, most definitely on the border of lunacy, kind of crazy lady residing in Colorado with the love of her life and her five, furry four legged children, hiking a trail or hiding behind shelves at grocery stores, wondering what kind of lube the nervous stranger will bring home to his wife. Oh and she loves a good boob squeeze!
Like me on Facebook: https://www.facebook.com/meghanquinnauthor
Find me on Goodreads:
https://www.goodreads.com/author/show/7360513.Meghan_Quinn
Visit my website: http://authormeghanquinn.com/
Share