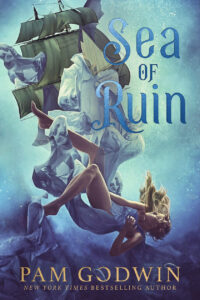 Bennett Sharp is on the run.

Wanted for piracy, she fears neither God nor death nor man.

The unfaithful, stormy-eyed libertine hunts her with terrifying possessiveness. Nothing will stop him from coming for her. Not his unforgivable betrayal. Not when she’s captured by the ice-cold pirate hunter, Lord Ashley Cutler.

She must escape Ashley’s prison and Priest’s deceit. But can she walk away from their twisted desires?

Two gorgeous captains stand on opposite sides of the law. When they collide in a battle to protect her, the lines blur between enemies and lovers.

Passion heats, secrets unravel, and hearts entangle until they break.

Can love prevail in the sea of ruin?

The Sea of Ruin is easily one of my 2020 top reads. It was un-put-downable.  I stayed up until nearly 3 am reading and woke up bleary-eyed with the most satisfying book hangover. The heroine was so fierce. From the moment she was fourteen, my heart broke for her and I cheered on her resilience. Seven years later she is running from her husband because he hurt her terribly.

“He wanted to entangle our future. I wanted to undo our past.”

I wanted her to forgive him. I felt their feelings. I felt their love. This is one of my favorite reactions an author can give me. I love when my feelings are right alongside the author’s and I was one hundred percent vested, feeling it all.

The struggles for Bennett are very real and very tragic. I had all the sniffles, all the edge of my seat, just one more page, feels. God, the things she went through. I didn’t expect this to go the way it went, but I loved it. Bennett, a woman who was far beyond her time in her independence, was so amazing.

“I can’t seem to make sense of you.” “It’s easy, Commodore. Just think of the smartest man you know, remove all the hauteur and bigotry, and add a larger pair of testicles.”

I loved so very much about this dark, unique historical fiction book. Simply perfection on the Sea. 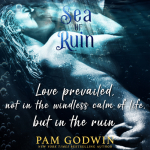 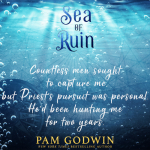 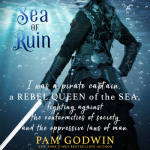 The short story, KING OF LIBERTINES, can be read before or after SEA OF RUIN.

It’s only available in the AUSTRALIA anthology: 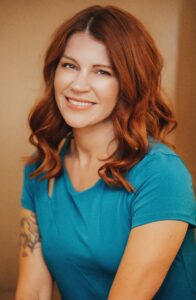 New York Times and USA Today Bestselling author, Pam Godwin, lives in the Midwest with her husband, their two children, and a foulmouthed parrot. When she ran away, she traveled fourteen countries across five continents, attended three universities, and married the vocalist of her favorite rock band.

Java, tobacco, and dark romance novels are her favorite indulgences, and might be considered more unhealthy than her aversion to sleeping, eating meat, and dolls with blinking eyes.

Footsteps sounded behind me, the tread of a single pair of boots approaching from the shore.

Beads of sweat trickled between my breasts and gathered beneath the stays. I knew that lazy, arrogant gait. I feared it.

Pushing back my shoulders, I girded my spine and turned to face my biggest mistake.

A few paces away, the pirate leaned against a wooden post. His thumb hooked casually in the straps of leather that wound around his trim hips. His other hand hung at his side, dangling my lost compass by the chain.

Rancor battled longing. Scorn collided with sadness, and my outrage bowed beneath the helpless, banal attraction I’d always felt for him.

His brown breeches fit him like a glove, the threads molding around powerful thighs and the sizable bulge of his groin. His loose shirt tucked into multiple belts at his waist and laced up his chest to open at the neck. A strong neck, covered in scruff and sinew.

I swallowed thickly, my entire body pulsing with an unwanted ache as my gaze rose to his.

Eyes glinting like polished steel glared down at me. Moonlight cast his prominent features in stark relief—stern forehead, defined cheekbones, perfect nose, full lips—leaving the rest of his face in shadow. The severe straight line of his mouth amplified the intensity in his expression.

He was furious. Seething with two years’ worth of blistering, unresolved ire.

My heart died a thousand deaths before I found my voice. “Priest.”

“Bennett, my love.” He spilled the endearment into the air, each syllable a vicious growl of torment. “How I’ve missed you.”