The Mighty Storm brought us the Jake and Tru. Their combination created the ‘perfect’ storm of passion, drama and crazy rock star life! Finding Storm features Storm Slater ~ son of The Mighty Storm’s (TMS) Jonny Creed. Going back to the beginning of TMS, Jonny died before he knew he fathered a son. Fast forward and Slater is all grown up. Following his dad’s footsteps with his own band ~ Slater Raze.

The son of an icon.
He was a legend. Rock royalty.
A man I never met.
But I’m measured against him in every aspect of my life.

After a confrontation and an unplanned road trip, Slater finds himself in a small town. Coming to his rescue is Stevie Cavalli ~ She’s fresh, funny and clueless to any music that is not from the eighties.

I loved catching up with the guys from TMS. Samantha Towle brings us a new story that is funny with great one liners. It is a slow burn between Slater and Stevie but oh so worth the wait! The sexy times are HOT! It is a quick, funny, sexy read. Let’s not forget about Slater’s bandmates: Levi, Creed and Cash. It leaves me wondering if the other members of Slater Raze have a book as well? If so – count me in!

She’s like everything I used to know.
And she has no clue who I am.
Even if she did, I don’t think she’d care.

It’s been a long time since my love of The Mighty Storm began and tbh, I had no idea who Storm was but tbh, I didn’t care.  I knew that Samantha Towle would bring it all back to me and she did.

Storm who is Jonny’s son is the adopted son of Tru and Jake.  He’s a quintessential rock star – sex, drugs and rock and roll.  Like – sex with 2 women and waking up and not knowing their name kinda thing…

After learning he’s been lied to for years by all who love him, Storm leaves LA and finds himself in Arizona where he meets a spitfire of a girl named Stevie.  She works with her grandmother at a B&B and helps her Dad and brother out as needed.  Well – the first meeting of Storm and Stevie is when she shows up to tow his car. She has no idea who he is (she’s a 90’s music girl – so not into Storm’s music).

Their friendship and attraction are immediate but them getting together is a SLOWWWWW BURN… it’s s worth the wait!

I loved seeing all TMS boys again and once again Samantha Towle has created characters I want to be friends with and hang out with!

AVAILABLE ON AMAZON – only $2.99 for a limited time and available in KU 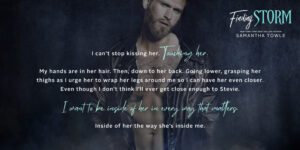 The son of an icon.

He was a legend. Rock royalty.

A man I never met.

But I’m measured against him in every aspect of my life.

The only time I feel like me … the real me … is when I’m onstage with my band. But the more we grow in popularity, the more people compare me to him.

I’m not him. And I never will be. If only everyone could figure that out for themselves

I need a break from it all.

Then, a confrontation has me jumping in my car, putting LA in my rearview mirror. And a stupid mistake ends up with my car on the side of the road. And straight into the path ofa girl who is the exact opposite of everyone else in my life.

And she has no clue who I am.

Even if she did, I don’t think she’d care.

I think she’s intriguing. And hot. Let’s not forget hot.

I’m stuck in this town overnight while my car is being fixed. But I’m thinking I’m gonna stick around a bit longer.

I’m Storm Slater, lead guitarist in Slater Raze and the only child of the late, great Jonny Creed. But, here, right now … I’m nobody. Just a regular guy.

I’m liking it a whole lot.

And I’m liking her even more. 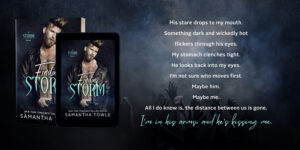 WHAT’S A ROCK STAR BOOK WITHOUT A PLAYLIST?

“The Monster” by Eminem, featuring Rihanna

“Don’t You (Forget About Me)” by Simple Minds

“I Wanna Dance with Somebody” by Whitney Houston

“I Don’t Care” by Ed Sheeran and Justin Bieber

“God Is a Woman” by Ariana Grande

“Is This Love” by Whitesnake

“Glory of Love” by Peter Cetera

“Love Is a Battlefield” by Pat Benatar 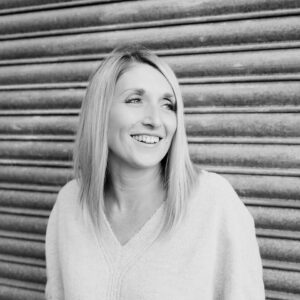 A native of Hull, she lives in East Yorkshire with her husband, their son and daughter, three large furbabies and their small grumpy cat.

She is the author of contemporary romances, The Storm Series, The Revved Series, The Wardrobe Series, The Gods Series, and standalones, Trouble, When I Was Yours, The Ending I Want, Unsuitable, Under Her, River Wild, and Sacking the Quarterback which was written with James Patterson. She has also written paranormal romances, The Bringerand The Alexandra Jones Series. With over a million books sold, her titles have appeared in countless bestseller lists, and are currently translated into ten languages. 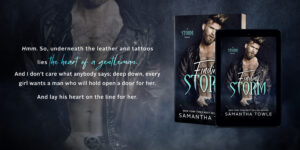 Sign up to Samantha’s newsletterfor news on upcoming books

Follow her on Instagramfor random pics, and the occasional photo of her

And lastly Bookbub, just because.