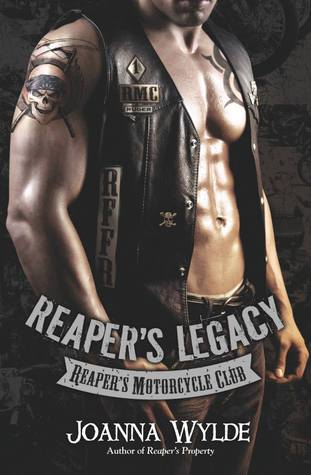 Eight years ago, Sophie gave her heart—and her virginity—to Zach Barrett on a night that couldn’t have been less romantic or more embarrassing. Zach’s step-brother, a steely-muscled, tattooed biker named Ruger, caught them in the act, getting a peep show of Sophie he’s never forgotten.

She may have lost her dignity that fateful night, but Sophie also gained something precious—her son Noah. Unfortunately, Zach’s a deadbeat dad, leaving Ruger to be Noah’s only male role model. When he discovers Sophie and his nephew living in near poverty, Ruger takes matters into his own hands—with the help of the Reapers Motorcycle Club—to give them a better life.

Living with outlaw bikers wasn’t Sophie’s plan for her son, but Ruger isn’t giving her a choice. He’ll be there for Noah, whether she wants him or not. But Sophie does want him, has always wanted him. Now she’ll learn that taking a biker to bed can get a girl dirty in every way…

From the first 2 pages I knew I was on a ride with Wylde that I was not going to want to get off of.  Joanna Wylde has a writing style that draws you in and keeps you wanting to know what is happening next.  I thought that there were enough surprises throughout to keep me thoroughly entertained.

Sophie has a love hate relationship with Ruger who is the kind of uncle to her seven year old son.  Ruger is part of the Reapers Motorcycle Club.  He is a super alpha.  He has been saving Sophie for a long time.

Ruger is about as alpha as they come. I do wish I got a little more sweetness to him but that’s just my flavor.  It didn’t take away from the story at all I just like my bad boy to have a little sweet.  One thing Ruger has going for him is he is loyal and throughout the whole story I did get the impression that he was willing to do anything for Sophie and Nate.

My only thing that held me back from giving this a full five stars is I wish the characters were described a little more but again I think that is just my flavor when I read.  I really like to get a good read on them.  I will say that I did get an awesome idea about all of Ruger’s tats and I think a pretty darn good description of his body, piercings and all.

There is a good amount of steam, so be prepared!

Start the series with Reaper’s Property

Joanna Wylde is a freelance writer and voracious reader. You can visit her website atwww.joannawylde.net.