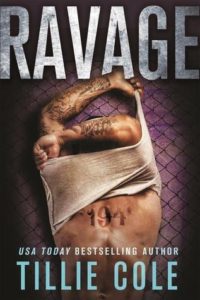 by Tillie ColeIs finding one’s true love worth committing the greatest sacrifice of all?

Taken as a teen, prisoner 194 was stripped of his name and freewill, meticulously honed to be a ruthless machine. Even as he tries to fight his captors hold on him he knows that obedience is the only way to save his sister, who is the one person that keeps him from turning into a monster.

As a young girl Zoya Kostava barely escaped the brutal attack that killed her entire family. Now twenty five she lives in secrecy. That is until she hears her brother also survived and is living with their greatest enemy.

Zoya risks her safety and anonymity to find the brother she thought dead and is captured by a beautiful, brutal man. A man who both captivates and scares her, in him she sees a soul as lost as her own.

Ravage is the third book in the Scarred Souls series.Unfortunately I didn’t read the first two books so it was a little confusing inthe beginning especially trying to follow some of the names since many were in Russian.

I have to say the blurb about the book is its best review. This is a story packed with so much emotion. It is dark. It is gritty. Two people who have nothing in common but the despair that they have had to live with. Their lives suddenly come crashing together.  You feel angry, sad, & desperation.There are so many other emotions that I can’t even describe. You feel their strength, their weakness, and their desperation throughout the book. Desperationto survive, to hold on….

Also, there is a set up for the next book that made me want to cry. But you know what, I want to read it, and I want to go back and read the first two books as well.

So here is the blurb:

Taken by the JakhuaClan as a teen, 194 was stripped of his name, his identity, and his free will,meticulously honed to be a ruthless, soulless killing machine, trained solely to spill blood and stop hearts. This is a role he resents with every fiber of his being, but one he embraces to gain back the precious leverage the Georgians wield as their weapon of control: his younger sister, 152.

Mzia Kostava is in shock. After fleeing her mafia family’s massacre in Georgiaas a child, Mzia lives in secret, hiding from her enemies in the dark shadowsof Manhattan. At age twenty-five, believing all her family is dead, word reaches Mzia that her brother Zaal is very much alive… and living with their family’s greatest enemy: the Volkov Bratva in Brooklyn.

Yearning to be reunited with her beloved Zaal, Mzia risks her safety and anonymity for the brother she had mourned since childhood. But just as she reaches Zaal’s apartment, Mzia is seized and taken captive by a strange man,who is strong, dark, and brutal… Unyielding, he demands her utter obedienceas he locks her away in darkness. He is highly skilled in torture and inflicting pain, and demands to know everything about her brother Zaal andeverything about her. He is a man that’ll do anything to get what he wants.

Sometimes love requires the sacrifice and betrayal of those held most dear. But is finding one’s true love worth committing the greatest sacrifice of all?

As the blurb says the story focuses on Valentin, prisoner194. He must give his obedience in order to save his sister. He is turned intoa horrific killing and torturing machine. He is drugged to be obedient and to kill. He is a slave to his ‘Mistress’ who does unspeakable acts to him. But Mistress and the people who took him don’t realize that the drugs don’t always work, that he still remembers everything…….

Although Mzia is not actually held captive, in a way she is.Her family was slaughtered when she was just five years old. She has beenhidden away from the enemies of her family.  Always looking over her shoulder. Unable to move about freely. She is a victim of her circumstances.  She sets out to find her brother when she is unknowingly lead to believe that she is safe and free. By fate she catches the eye of the man set out to kill her brother. And so itbegins…. What starts out as a job, a mission turns into more, much more…..

‘I knew his life had been as impossible as mine. Knew he wasn’t truly as evil as he seemed. He was just like my Anri and Zaal. Like me. Broken.’