Review: OWN THE WIND (A Chaos Novel #1), Kristen Ashley 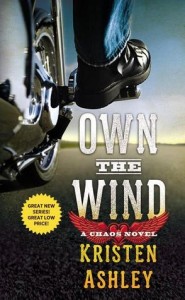 Too hot to handle…

Tabitha Allen grew up in the thick of Chaos–the Chaos Motorcycle Club, that is. Her father is Chaos’ leader, and the club has always had her back. But one rider was different from the start. When Tabby was running wild, Shy Cage was there. When tragedy tore her life apart, he helped her piece it back together. And now, Tabby’s thinking about much more than friendship…

Tabby is everything Shy’s ever wanted, but everything he thinks he can’t have. She’s beautiful, smart, and as his friend’s daughter, untouchable. Shy never expected more than friendship, so when Tabby indicates she wants more–much more—he feels like the luckiest man alive. But even lucky men can crash and burn…

Is there a Kristen Ashley book out there that gets less than five stars?  I mean is there?  Is everything she writes this good always?  I am pretty sure the general consensus regarding Kristen is yes, it’s always this good.

This is my fourth K.A. Book and I am glad that the ones I have read were mentioned in this book. K.A. blends her characters in several of her series together.  We get Tack our Motorcycle Man, Hawk Delgado the Mystery Man makes an appearance, Lucas the Law man and even Indy the Rock Chick all show up for a cameo.  Because everyone of her books is a 5 this is exciting, its like icing every time it happens.

Okay so I have established the greatness of Kristen Ashley lets talk Chaos! Shy was there in Motorcycle Man when Cherry went all badass on Tabby’s no good boyfriend.  So Shy has some assumptions about Tabby.  Some maybe true, some maybe not so much.  Needless to say there is history.

This is the story of Tabby and Shy Cage.  SWOON SWOON SWOON!  Shy seems perfect for Tabby.  You know sometimes in these motorcycle books you hate to love the biker bad boy.  Not here!  You love Shy all the way through.  I love how he handles Tabby.  I also love that she knows the club so she knows when to listen.  It is a nice welcome.

I cried in this book quite a few times but not for things that you would think.  It was more tender moments like Shy has words with Tack and his brothers, that got me.  Also Tabby has words with Cherry cause she is let down, that got me too.  So it wasn’t just regular painful things but the beauty in relationships that K.A. wrote that totally drew me in.

If you have never read a K.A. book before you could pick this up and follow along.  I think it would be more fun if you at least read Motorcycle Man first though.  By the way Parker (Shy) Cage is definitely on our Bad Boy List.