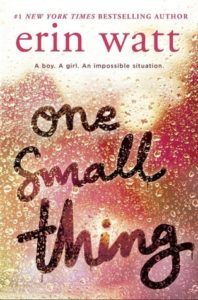 Beth’s life hasn’t been the same since her sister died. Her parents try to lock her down, believing they can keep her safe by monitoring her every move. When Beth sneaks out to a party one night and meets the new guy in town, Chase, she’s thrilled to make a secret friend. It seems a small thing, just for her.

Only Beth doesn’t know how big her secret really is…

Fresh out of juvie and determined to start his life over, Chase has demons to face and much to atone for, including his part in the night Beth’s sister died. Beth, who has more reason than anyone to despise him, is willing to give him a second chance. A forbidden romance is the last thing either of them planned for senior year, but the more time they spend together, the deeper their feelings get.

Now Beth has a choice to make—follow the rules, or risk tearing everything apart…again.

Erin Watt is a new-to-me author. One Small Thing is a story about life, love & loss. It is emotional and touching with a dose of angst.

Beth’s sister Rachel died three years ago. Her family struggles to move on. Beth feels trapped. Her parents hover over her every move and refuse to go forward, keeping Rachel’s things in place like a shrine. The story can be raw and intense at times.

“Rachel is everywhere. Her room is in the exact condition it was the night she died, except Mom has made the bed.”

Beth rebels for a while by sneaking out and going to parties. She meets Chase at a party and they hit it off. Neither one of them realizes the connection that they share. Beth finds comfort in Chase. And eventually, they find comfort in each other. Her parents, her friends, her teachers all have an idea or expectation of the way that Beth should grieve the loss of her sister.

“All of them expect me to react a certain way, but I just want to be me. If I knew who me was. I’m trying to figure that out.”

Chase has his own demons to fight as well. He has put his own harsh expectations on himself for his involvement in Rachel’s death. He has an overwhelming sense of guilt. There are many turbulent times at school to feed into his self-loathing. Chase has gained a lot of perspective while in juvie and this helps him to give some of that perspective back to Beth. I loved Chase! Having a life altering event happen can break anyone, and yet he persisted and came out a kind, quiet and sweet guy. I just wanted to hug him!

“I focused on one good thing instead of all the fuck-up stuff” One small thing.”

I really enjoyed the story. It was well written. The writing flowed and the characters were relatable. There were many other issues in addition to Rachel’s death that were addressed as well. I will definitely be reading more of Erin Watt in the future!

“If you ask my parents, Rachel spoke the language of unicorns and pooped out rainbows. She was a perfect, wonderful angel.”