Review ~~ My Soul to Keep by Kennedy Ryan 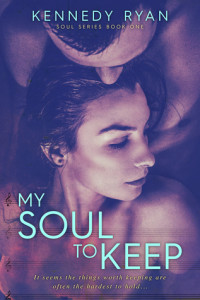 I had two things in life that mattered. My mother and my music.
Mama was taken from me too soon, and now music is all I have left. It’s the thing that’s pushed me right out of backwoods Georgia into Los Angeles, where the line between fantasy and reality shimmers and blurs. I’m finally making my way, making my mark. I can’t afford to fall for one of music’s brightest stars. Not now. Music is all I have left, and I’m holding on tight with both hands. I won’t let go, not even for Rhyson Gray.

I had one thing in my life that mattered – music. The only constant, it’s taken me to heights most people only dream about; a gift dropped in my lap at birth. I thought it was enough. I thought it was everything until I met Kai. Now she’s all I think about, like a song I can’t get out of my head. If I have to chase her, if I have to give up everything – I will. And once she’s mine, I won’t let go.

I have said it before and I will say it again…

I LOVE GOING INTO BOOKS BLIND!  A friend suggested I read this book and she’s a great judge of books, so i just read it because she told me to! And I am so glad I did.

I JUST FINISHED My Soul To Keep!

Rhyson Gray – a child prodigy that has been in the limelight since he was 3 years old.  At 16, he emancipates from his parents.  This has made him the man he is today.  He is a good friend to a few select friends.  He began in the limelight as a classical pianist and has transformed himself into one of the most loved pop star of our time.  He has the potential to be an alpha male but has the sweetness that every girl wants in a man. He’s patient and kind and wants just the best for Kai.

Kai – she’s a bad ass on the outside but a mess on the inside. Losing her mother just a few months before has changed her. Her father walking out of her life changed her when she was 8, she in unwilling to trust.

Rhys was a voice that helped get her through the hardest time in her life, track #9 is what she woke with and fell asleep too. And now this voice is her friend. He wants more but she’s trying so hard to not allow him in…but it’s inevitable.

I enjoyed watching this couple grow from acquaintances to friends to more. My heart was a flutter, the butterflies were flying…but holy hell…the ups and downs kept me reading to all hours of the night!

Beware, there is a cliffhanger and I am so looking forward to watching this unfold even further!!