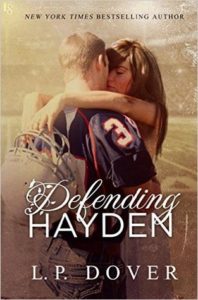 by L.P. Dover
The Carolina Cougars keep fighting for love as the Second Chances series from bestselling author L. P. Dover continues! In Defending Hayden, a damaged football star teams up with the only woman who can take the pain away.

No one’s tougher than Carolina Cougars linebacker Derek McLaughlin. But when a fatal car accident claims the life of his girlfriend, Derek finds himself caught in a destructive spiral of drugs, alcohol, and meaningless sex. But not even a string of one-night stands can ease the hurt. Football is all he has left. Then fate leads him back to the scene of the crash, and into the arms of a kind, gorgeous woman who sees past his façade to the man he once was . . . and can be again.

When a chance roadside encounter brings Derek into her life, veterinarian Hayden Hunter isn’t fooled by his bad attitude: All bark and no bite, he’s hiding a wounded heart beneath that gruff demeanor. And Hayden wants to be the one to kiss it all better. Soon they both find that a dose of passion is potent medicine. But when a hidden enemy lashes out at Hayden, Derek steps up to do what he does best: put his body on the line in the name of love.

I rarely read second chance romance books, but there something about reading LP Dover–I’m drawn to them and really enjoy them. This book picks back up right where book one left off, by a few months. Derek is trying to get his life back on track after battling with his demons. He is learning how to pick up himself up, be a part of this team and stay focused on his career.

Hayden Hunter is the local veterinarian who is clueless about who Derek is. When she bumps into him and isn’t star struck it blows Derek away but it’s also refreshing. Derek and Hayden find themselves meeting a second time after Hayden comes across an injured dog and Derek comes to help. They build a strong friendship that grows  overnight. The attraction is strong; neither one can deny it. The couple has its ups and downs but what couple doesn’t? The banter between them was refreshing. There’s some drama. The storyline has a bit of a twist, but everything else falls into place it was a great read.
An ARC was provided to Blushing Babes Are Up All Night in return for an honest review.
IT’S LIVE
AMAZON 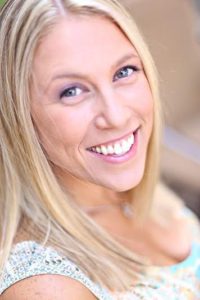 NYT and USA Today Bestselling author, L.P. Dover, is a southern belle residing in North Carolina along with her husband and two beautiful girls. Before she even began her literary journey she worked in Periodontics enjoying the wonderment of dental surgeries. Not only does she love to write, but she loves to play tennis, go on mountain hikes, white water rafting, and you can’t forget the passion for singing. Her two number one fans expect a concert each and every night before bedtime and those songs usually consist of Christmas carols. Aside from being a wife and mother, L.P. Dover has written over nine novels including her Forever Fae series, the Second Chances series, and her standalone novel, Love, Lies, and Deception. Her favorite genre to read is romantic suspense and she also loves writing it. However, if she had to choose a setting to live in it would have to be with her faeries in the Land of the Fae.
STALK LP DOVER  FACEBOOK  TWITTER GOODREADS
Share