Review & Interview: THE TROUBLE WITH MOJITOS by Romy Sommer 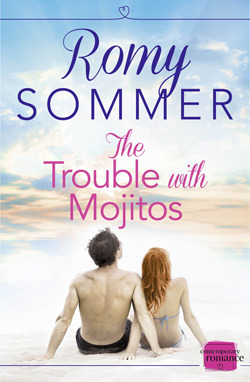 Turquoise blue waters. Sandy white beaches. Mojitos… Film location scout Kenzie Cole has found herself in paradise. Working in the Caribbean for a week is just what she needs to escape the long line of exes in her closet. Though the last thing she expects is to be picked up at the resort bar by a disgraced former Prince!

Luckily for Kenzie, exile is suiting the man formerly known as Prince Fredrik very well. And it’s not long before his rugged, pirate charm is proving hard to resist.

But Rik’s been spending his time in paradise exorcising demons of his own and he has danger written all over him. If Kenzie was sensible she’d run a mile instead of lose herself to lust – although, they do say sometimes you have to get lost before you can be found….

The Trouble with Mojitos is published by Harper Impulse, a division of Harper Collins, and is available from the following online retailers:

UAN: Hey Romy, thanks for joining us on Up All Night Book Blog! Dawn had an opportunity to read The Trouble with Mojitos (Book 2 in the Westerwald series), so we’re excited to having you here for a few minutes!

I’m excited to be here too, ladies. Thanks so much for hosting me!

So for someone who hasn’t read your books, can you tell us a little about The Trouble with Mojitos, and your next one coming out soon?

My books have been described as modern day fairy tales, and The Trouble with Mojitos is no exception. It’s Book 2 in my Westerwald series, but it’s a stand-alone book and can be read without first reading Waking up in Vegas.

The Trouble with Mojitos is set in a luscious paradise. Did you research for it by traveling to a tropical island?

I wish! I grew up in a sub-tropical region of South Africa though, and I love sunshine and warmth (which is why I live in Africa!) so it wasn’t too much of a stretch of the imagination to visualize the setting – but the Caribbean is still very much on my Bucket List!

We need to add that to our Bucket List!

There’s also a legend that is referred to in Trouble. What was the inspiration for it?

To be honest, I don’t remember! The legend sort of wrote itself, long before the rest of the story made itself known to me. The legend also heavily influenced Book 3 (tentatively titled Life in Technicolour).

As an author, what has been the best part of your author journey so far?

Good reviews and contact with readers are definitely a highlight of being published. Even if Harper Impulse hadn’t shown faith in me by publishing my books, I’d still be writing these books, but knowing that others enjoy my stories too makes me feel a lot less lonely!

Trouble is a modern-day fairy tale. Growing up, did you have a favorite fairy tale?

I love all fairy tales, but I prefer the Disneyfied Happy Ever After versions to the grim Grimm versions. My favourite story growing up was the Princess and the Pea – it still is, though I’ve given up hoping Disney will do anything with it. Hmmm, if they don’t perhaps I need to do something with that story….?

What is your writing process? Do you write every day? Do you have a special place you write? Does Simba help you write or is he just a bed hog? Haha

I try to write for a half hour every weekday morning, if my work schedule allows, and more on weekends. I also write at night though I’m far less productive when it’s late and I’m tired (unless you count Facebook or Pinterest as being productive!).

I have a desk, but it’s usually so cluttered that I sit on my bed to write, with the laptop on my lap.

And no, Simba is no help at all! In fact, he gets really miffed when he sees the computer because it means he’s not going to get cuddles, so the moment the laptop appears he stalks off with his nose and his tail high in the air to express his disapproval.

Out of all your characters, which has been the most challenging to write and why?

The book I’ve just finished, the third in the Westerwald series, was definitely the most challenging. The hero is mixed race, which is outside the realm of my personal experience and I really hope I’ve treated his issues both realistically and sensitively. But the biggest challenge was the heroine of this story – she’s described as an Ice Queen, and it’s a title she’s proud of, so to make her sympathetic took a great deal of effort. I hope I cracked it!

What do you think it is about romance that is so captivating and continues to bring readers back time after time?

For me, it’s that almost magical belief that there is a Happy Ever After possible for each and every one of us.

Also, there’s so much darkness, stress and unhappiness around us that we need the joy of romance. After a day at work, sitting in bumper-to-bumper, dealing with fractious kids, paying bills, and seeing all the grim news on TV, we need to immerse ourselves in stories that guarantee an uplifting ending. I can’t speak for anyone else, but romance novels keep me sane!

Lots of books keep us up all night reading. What’s the last book to have kept you up all night?

The last book that kept me awake well into the early hours was Kelly Hunter’s What the Bride Didn’t Know. I love all Ms Hunter’s books, and each one just gets better than the last, so I knew when I started reading that I would be giving up a night’s sleep.

Oh, that one looks like a good read! Thank you!

Last question, for any aspiring authors out there, what advice would you give to them when starting out?

Anything you’d like to add before we wrap up?

I’d like to thank Dawn for her lovely review of The Trouble with Mojitos. I’m so glad you enjoyed it!

Life in Technicolour will also be available soon – and there’ll be a special treat for readers following on its heels, so watch this space!

You are so welcome, Romy. It’s been a pleasure getting to know you and read your work. We thank you SO much for the opportunity to have you here on Up All Night Book Blog! We look forward to more in the Westerwald series! And now for an excerpt from The Trouble with Mojitos…

Kenzie sagged against the bar counter, not caring that her order sounded desperate or her body language suggested impatience. She needed alcohol, and she needed it now.

The benefit of an empty bar was that the drink came reassuringly quickly, poured from an ice cold jug ready and waiting, and complete with swizzle stick and paper parasol. She ditched both and tossed the drink back.

“Want to talk about it?”

“Thanks, but I didn’t come here to talk.” She’d done enough of that all day. Talk, talk, talk, and still nothing to show for it. Now she understood how used car salesmen felt. Used.

It was enough to drive a girl to drink. Or at least to the resort’s beach bar, since hitting the mini-bar in her hotel room was just too sad to contemplate.

She didn’t drink alone. For that matter, she didn’t usually drink. Not these days.

Beyond the thatched cabana, the sky flamed every shade of pink and orange imaginable as the sun set over the white sand and surf. But here inside the bar was dark, shadowy and strangely comforting after a day of white-hot heat.

She turned to the wryly amused voice, and wished she hadn’t as she spotted the dark figure at the shadowy end of the long bar. Great. The resident barfly, no doubt. As if she needed another reason to hate this resort, this island, and the whole stinking Caribbean.

“I can order my own drinks, thank you.”

The shadowed figure shrugged and turned his attention back to his own drink. “Suit yourself.”

She ignored the deep-throated chuckle down the other end of the bar as the barman removed her glass to re-fill it.

The second drink followed the first a little more slowly, and this time she took a moment to savour it. Now she felt better.

But she was still screwed.

Neil had known it when he sent her out here. He’d known she’d be stone-walled, he knew he’d set her an impossible task, and still he’d sent her. He’d expected her to fail. Perhaps even wanted her to fail.

There were days when her past seemed very far behind her. And then there were days like today, when it seemed she’d never escape the follies of her youth.

“That’s the spirit.” The stranger at the other end of the bar slid from his bar stool, out of the shadows and into the yellow lamplight.

In another time and place he might have looked gorgeous, but in low-slung jeans that had seen better days, black long-sleeved tee, with hair in drastic need of a cut, several days’ worth of beard, and darkly glittering eyes, he was devastating.

The Trouble with Mojitos opens with an intriguing, exciting story about pirates and long-ago fairy tale with an unfinished ending…waiting for something to break a curse.

Then we meet Rik and Kenzie. Kenzie is sassy and instantly drew me in with her take-no-crap personality. I loved her strength of purpose mixed with a touch of vulnerability. Rik jumps off the page as a possible modern-day pirate with some secrets to keep. I loved their dialogue with each other and internally too. Another aspect that was fun, which I adore in books when handled well, are the tweets between Kenzie and her roommate, Lee.

I loved this sweet, romantic story that had me caught up for a few hours in a far off, tropical setting! This is one of those books that just take you away from the realities of everyday life and leave you smiling in the end. I felt like there were a few parts that weren’t fully resolved or addressed in this book and although it’s part of a series, it can be easily read as a standalone. I’ll definitely be reading the next book, particularly when I need an easy, sexy escape! 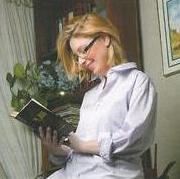 I’ve always written stories for myself, but didn’t even think of being an author until I realised that being over thirty and living in a fantasy world was a little odd. Writing those same stories for other people makes it a lot more acceptable!

By day I dress in cargo pants and boots for my not-so-glamorous job of making movies but at night I come home to my two little Princesses, in Johannesburg, South Africa, where I live, and I get to write Happy Ever Afters. Since I believe every girl is a princess, and every princess deserves a happy ending, what could be more perfect?