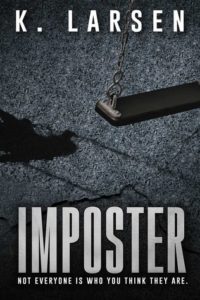 In idyllic Brunswick, Maine, a tragedy strikes, leaving one family struggling to stay together.

7-year-old Sophie Anderson vanished from a neighbor’s front lawn in 2006 leaving the Anderson family reeling. Helen, a mother who never gave up hope.
Sam, a father who couldn’t cope. Cora, the even-keeled sister and Shane, the angry half-brother fought to maintain their family after losing Sophie.

Just when the Anderson’s thought they had moved past Sophie’s disappearance,
Cora finds Sophie shivering behind a dumpster in Portland, Maine 10 years later.

As Sophie integrates back into her family home a series of dark revelations rear their ugly heads leaving you wondering… is anyone who you think they are?

Imposter is full of suspense it’s an absolute page-turner.  From the moment I began reading,  I was consumed I needed to know who the imposter was! I had my suspicions but then I was thrown off track on numerous occasions. K Larsen  has you so captivated its mind boggling to the events that take place. Makes you wonder who’s the telling the truth who’s twisting the story? What an enthralling emotional story of the Anderson family who’s Child has disappeared to come back 10 years later after being found. The story follows the family and how they adjust to the changes in Sophie.

The events in this story are unbelievable she really has you guessing. My jaw dropped to the floor a few times. All these secrets will destroy some but will also heal others. It’s like putting a puzzle together you will absorb very word and start piecing it together. The story is built with so much suspense the secrets that are revealed is unbelievable. This is so much more than what the what I expected. We see how power can destroy so many.
The revelation is both heartbreaking and painful. How can anyone do that? With every revaluation that is made its clear one person can be so dangerous and callous. When the truth comes out I had so many emotions.
iBOOKS: https://goo.gl/eipMcJ
NOOK: https://goo.gl/wUKrqJ
KOBO: https://goo.gl/6mqqHl
AMAZON: http://amzn.to/2gwVSXF
Share