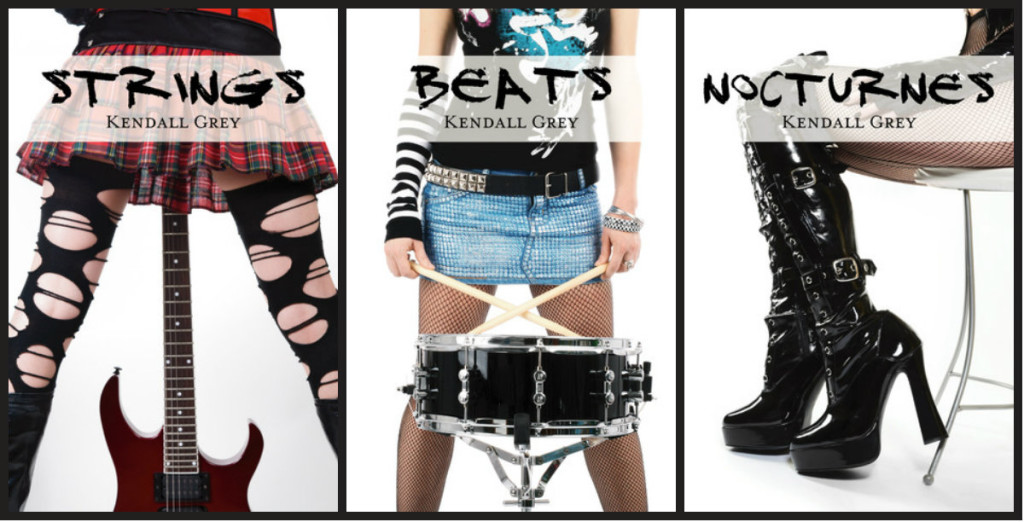 WARNING: STRINGS is not suitable for slut shamers, uptight stone throwers, Holier-Than-Thou prudes, humorless virgins, persons with chronic neck or back pain, pearl-clutching bitties, those who disparage crude humor or vulgarity in their many forms, closed-minded people with sticks up their asses, or anyone under the age of 18. The vile, base language and shocking, unholy sexual acts contained herein are not condoned by anyone with a lick of sense and should certainly not be reproduced without proper training and protection. The potty-mouthed and perpetually horny “heroine” (the term is used loosely) of this book does not resemble a normal, well-adjusted, or remotely believable person in any way, shape, or form. The author acknowledges that the characters in this book are shallow and two-dimensional; the plot is both ridiculous and insipid. She makes no apologies for any of it.

Free-spirited musician Letty Dillinger adheres to a strict, “no strings attached” policy when it comes to men. After a wild night of unabashed sex in a fancy hotel room, she never expects to see the adventurous stud she dubs “Shades” again. When her all-girl rock trio books a tour at the last minute as the opening act for their archenemies, Letty’s shocked to discover she knows the competition’s new lead singer. Intimately. Shades is no longer a one-night stand. Now he’s the guy she has to one-up on stage every night for the sake of her career.

Sharing close quarters on a bus with her sexy nemesis and his bad-boy buddies puts Letty’s Golden Rule to the test. On this tour, guitar strings aren’t the only things being played. And when heartstrings are pulled too hard, they’re bound to snap sooner or later.

For months, shy drummer Jinx Hardwick has been silently crushing on her tall, dark, and scary bandmate, Toombs Badcock. Drawn to his frightening ink and scars, she yearns to uncover the shadowy secrets lurking behind his silver eyes, but Jinx is too intimidated to even look at him, let alone talk to him. When she stumbles upon Toombs and their manipulative lead guitarist Rax in a compromising position, Jinx realizes her chances of winning Toombs’s heart aren’t just a long shot—they’re nonexistent. To make matters worse, Jinx’s family needs her at home. She’s about to back away from it all—Toombs, the band, her dreams of fame and fortune—when Rax makes her an offer she can’t refuse: a no-holds-barred night alone with Toombs. There’s one small catch. She has to go through Rax to get it.

NOCTURNES contains 511 F-bombs, 81 well-endowed male chickens, 65 girl kitties, 58 Richard the Lessers, 10 C-U-Next-Tuesdays, and a plethora of other colorful words and phrases that would deafen your virginal mother’s ears and make her bust out her “Shame on you!” finger. If you’ve been tuned in since the beginning of the Hard Rock Harlots series, you know the drill. The sex is extreme, the language is graphic, and the story is over the top. Prudes and under 18s need not apply.

WARNING: NOCTURNES addresses serious topics such as alcoholism, prostitution, and cheating. If you’re looking for a barrel of laughs or sunshine and rainbows, this is NOT the book for you.

Rax Wrathbone is the dirty rock star you love to hate. The filthy fantasy slithering through your bed sheets. The serpent in your lady garden. The snake bite in your panties that keeps you sweating all night. He. Is. Sex.

And he’s no good. For anyone.

After a nasty breakup with his best friend and their band’s drummer, Rax is flying solo for the first time in years. Who needs the drama of commitment when the line for your humping booth spans three city blocks? No, groupies and liquor are far finer company than relationships, and they don’t leave bruises after they’ve had their way with you. At least not lasting ones.

Rax’s new adventures as an alcoholic, guitar-slashing one-man show are going along swimmingly until the only woman who’s ever brought him to his knees shimmies down a pole back into his life. Eve doesn’t abide excessive drinking, she has sex with strangers for a living, and she can’t remember Rax’s name to save her life.

She’s perfect in every way.

Now, if he could just get sober long enough to forget his past and convince Eve he’s worthy of her future…

For this one, I’m doing a combined review for all three in the series – Strings, Beats, and Nocturnes. I downed these three books in the space of 3 1/2 days! Once I started I couldn’t stop! I am a bit ashamed to say it took me so flipping long to get started with the series, but honestly, I’m glad I waited so I could read them all in one go.

Fair warning- READ the warning of the synopsis for each first! Not kidding, these may not be your cup of tea. Go in with open eyes. With that said, I loved them! They are raunchy, they push the limits and may stretch your boundaries. There’s so much to each story that goes beyond the naughty bits into finding acceptance and love, not giving up on your dreams, and finding that other half that may be broken like you but makes you both whole when two broken pieces come together. I loved the weaving in of the musical aspect into that which each character of the books is experiencing.

The writing was intoxicating. I found myself completely involved in the stories of Shades and Letty, Toombs and Jinx, Rax and Eve. It seemed like each one was just that much better than the last. There’s lots of laughs, a buttload of sex, and some very sweet and heartwrenching moments. Kendall Grey is an extremely talented writer who can paint a picture with words and draw out both huge highs and deep lows on an emotional rollercoaster ride that her characters experience. And damn does she make me want to be a groupie for Killer Buzz Float so I can stay with the group a little longer. And somehow, in the end, Kendall made me fall in love with Rax…smh…didn’t think it was possible! I loved this series and will definitely be reading more from Kendall Grey!

Kendall Grey, word wrangler, whale warrior, wicked wench, and lover of tongue-tripping alliteration, was born without an off-switch between her brain and mouth. She’s been called the “Flux Capacitor of Twitter” (@kendallgrey1) and “A little package of love all wrapped up in F-word paper,” but she’s really just a maniacal writer relaying eyewitness accounts of the rave inside her head. She writes urban fantasy with strong romantic elements and also dabbles in erotica and horror on occasion.

Kendall lives off a dirt road near Atlanta, Georgia, but don’t hold that against her.