#Review #FourAndHalfBlushes ~~ The Sound of Home by Krista Sandor 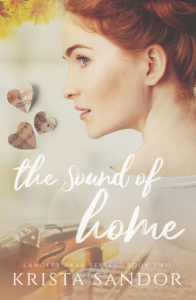 The Sound of Home

Em MacCaslin was never an ordinary girl. A child music prodigy, she’d crossed the globe performing with symphonies all over the world. Her future couldn’t have been brighter. But all her dreams were shattered in one night.

A night she doesn’t even remember.

Twelve years later, she’s back. And she wants answers.

Sparks fly and passions ignite when the man who left her to fend for herself wants to help her uncover the events of that fateful night. But not everyone wants Em to learn the truth. A truth with the potential to kill.

The Sound of Home is a sexy standalone romance in the Langley Park series.

Mary Michelle MacCaslin, Em, as she is known to her friends has her whole life ahead of her.  She’s a musical prodigy on the piano and violin who’s been wowing audiences all over the world.  She’s come home to spend some time with friends before heading off to Julliard.  A school where everyone has the same mindset as her – music is LIFE!

Michael MacCarron was the boy next door.  He also loves music – spinning as a DJ.  Unfortunately, family obligations may curtail his aspirations.  He also feels some kind of way about Em but she’s supposed to leave town and go on to do big things in New York.

So where is Em?  As it turns out she’s laying drugged, unconscious and obviously attacked on The Devil’s Steps in the cemetery.  She’s mumbling incoherently with her precious left hand a mangled mess.  The tragic events of this night tear them apart and lead to horrific and far-reaching consequences.

Em is home.  It’s been 12 years since her life fell apart.  She’s here to help prepare her childhood home for sale.  Her father is ill and has moved to an assisted living facility.  At least that was the original intent but Em has other ideas.  Who was responsible for shattering her dreams?  Her determination to find out what really happened to her that night may prove dangerous.  Or her attacker may have a surprise coming.  She is not an innocent, sweet, shy young woman anymore.  Things change.  She’s changed.

A little girl on Halloween night brings Em’s past, front, and center, virtually at her front door.  Michael and Zoe are standing on the sidewalk gaping at her and she’s doing the same.  The feelings are deep and raw and still painful.  She trusted them and they left her alone!  Michael and Zoe both feel crushing guilt.  All this is complicated by the emotions bubbling between Michael and Em.  Now she’s a woman accustomed to manipulating men and using their bodies to quiet the voices in her head.  Michael is having none of it.  He’s not playing her games.  Can these friends forgive and mend their relationships?  Will they find out who attacked Em?

I am going to read the first book in the Langley Park series.  Krista Sandor did a really good job of weaving together a love story within a mystery within a tale of redemption.  Babes!  The level of betrayal!  This book took my poor heart on a roller coaster ride of emotions.  Honestly, the book hangover is EPIC. I’ve never read Krista Sandor before but let me tell you – I am now a fan!