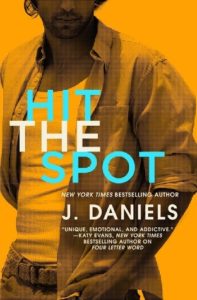 Is this love or just a game?

Tori Rivera thinks Jamie McCade is rude, arrogant, and worst of all . . . the sexiest man she’s ever laid eyes on. His reputation as a player is almost as legendary as his surfing skills. No matter how her body heats up when he’s around, she’s determined not to be another meaningless hookup.

Jamie McCade always gets what he wants. The sickest wave. The hottest women. And Tori, with her long legs and smart mouth, is definitely the hottest one. He knows Tori wants him-hell, most women do-but she won’t admit it. After months of chasing and one unforgettable kiss, it’s time for Jamie to raise the stakes.

Jamie promises that soon Tori won’t just want him in her bed, she’ll be begging for it-and he might be right. Somehow he’s found the spot in her heart that makes her open up like never before. But with all she knows about his past, can she really trust what’s happening between them? Is Jamie playing for keeps or just playing to win?

This book can be read as a stand-alone.
Book 1–Four Letter Word  – see review below

J Daniels introduces us to Jamie & Tori in ‘Four Letter Word’. They are the best friends of Brian and Sydney. Jamie is the cocky, sexy surfer. Cool confident, manwhore. Tori is the awesome fierce best friend, loyal, sassy and stubborn.

Tori tries to steer clear of Jamie although her body tells her otherwise. Jamie chases after Tori, the unobtainable. It becomes a game, then a bet and then turns into something more.

There is a lot of chemistry, I loved Jamie’s dirty talking but I had to keep reminding myself that he is a surfer and not in an “MC”. But the sex between Jamie & Tori is hot. I think my own girl part is worn out by just reading about it.

There are layers there if you look. Jamie & Tori both have issues to contend with. The real question is will Jamie hit Tori’s ‘soft spot’… 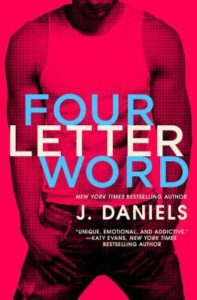 Which four letter word will change their lives forever?

Sydney Paige was never so mortified to hear the words “wrong number” in her life. She meant to tell off the guy who broke her best friend’s heart but unleashed her anger on a perfect stranger instead. And now her world is turned upside down by the captivating man who wants to keep her on the line.

Brian Savage is living a life he’s quickly come to hate-until Sydney’s wild rant has him hooked and hungry for more. Soon the sexy woman on the phone becomes the lover in his bed. But Brian has secrets, and the closer he lets Syd get, the harder it is to shield her from the devastating mistakes of his past . . .

“Love was a risk. It was wild and unpredictable. You could either hold on for the ride, not knowing how it would end, or you could let go and never know the amazing you could have had.”

J Daniels weaves a story about two people who have suffered loss and disappointment. Sydney Paige finds her life is not what she expected. Her marriage to her high school sweetheart has failed and he wants out. She runs to the safety of her best friend Tori. Sydney wants a fresh start. She wants to become the fun and silly girl she used to be.

Sydney arrives in Dogwood beach to find Tori is also suffering from a broken heart after finding out the man she was dating is married. Taking matters into her own hands, Sydney impulsively demands the phone number of the man who broke her best friend’s heart so she can really give it to him. The thing is, she dials his number and is off by one digit connecting her to a complete stranger. And so it begins…

Brian Savage’s life has taken a turn and not one for the better. He is going through life’s motions with guilt and regret. Until he gets that unexpected mistaken call….

“Oh my God. I am so, so sorry. This…. Was clearly a call not meant for you. I’m sure you’re not a douchebag tool.”

Brian can’t get Sydney out of his mind so on impulse he texts her back the next day to check on her and make sure that she is ok. Reluctant at first, Sydney gives in and texts Brian back. This starts the beginning of a friendship of sorts. The texting leads to phone calls….

Brain and Sydney develop an amazing connection which leads to a hot, possessive, steamy relationship except Brian has secrets…..

Their chemistry is hot! Their sexy time, break out the cold shower!

There is so much emotion in this book. Brian and Sydney both have issues to contend with. They come together and heal each other although the road to healing is not a smooth one. Overall, love wins!