Review for The Pleasures of Spring by Evie Hunter 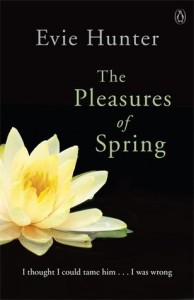 He picked up her hand where it grasped the water glass, felt her pulse and looked into her eyes. ‘You don’t want a man with manners. You want someone who will let you walk on the wild side, who knows what you’re really like …’

Roz Spring is an actress and a chameleon, the kind of woman who always lands on her feet. But even Roz can’t talk her way out of witnessing a murder, and she must go into hiding before the murderer comes for her.

Andy McTavish has turned his back on a life of privilege to prove himself in the world of international security. Tall, dark and dangerous, Andy is the ultimate seducer who has never met a woman who can tame him.

Roz needs his protection and, to get his family off his back, Andy needs a fake fiancée. The solution is obvious: pretend to be a couple. Getting up close and personal won’t be hard, as the chemistry between them is electrifying.

As two practiced charmers drive each other beyond the limits of sensual endurance, they find their usual defences are no good. When the barriers come crashing down, a raw passion emerges that neither wants to admit.

They know that when the murderer shows his hand, they will face a fight for life and freedom. And if they survive, what will happen when the need to pretend is over?

I will admit right now that my initial reason for wanting to read The Pleasures of Spring by Evie Hunter was to see if Irish erotica was like, you know, American erotica. Honestly, they make better beer in Ireland and their accent is to die for, why wouldn’t their naughtiness be better than ours? The kink level is pretty high, but the reader has to do a little more work on the visualization. Evie Hunter doesn’t spell it all out for you. She makes you work for the imagery, and I really liked that.

In Pleasures of Spring, we meet Roz Spring; a smart woman who can survive by her wits alone, if necessary. She is also funny, sexy and an incredible con artist. Being raised by her ne’er do well, con artist father, Roz has quite an arsenal of tricks that aid her in making the most of any situation she is thrown in. It is while pulling off one of these cons that she runs into the one man she can’t fool. Andy McTavish is one HOT Irishman! He is tall, dark and likes his sex a little kinky. His current assignment with the international security firm that he works for is to find Roz and bring her in to protective custody… And so the adventure begins!!! The attraction between Roz and Andy is intense, but not new. Though time has passed since last they saw each other, their connection is hotter than ever. From the funny and sexy Yahoo IMs they exchange to the way they “play” with each other, I found the room I was reading in got noticeably warmer! 😉

Evie Hunter does a great job of telling a story that goes way beyond sex and romance. There is intrigue, suspense, fear and vulnerability. We also see pain and loyalty. Each of these characteristics gives The Pleasures of Spring a depth that I wasn’t expecting. My connection with Roz was closer than just thinking she was a resourceful young woman with a wild and interesting past. I found myself understanding the depth of her pain and how that pain really drives most of the decisions that she makes.

The Pleasures of Spring is a 4 star read for me. It is also the 4th installment of the Pleasures series. This book is a standalone novel, but I will be reading the others in the series as I want to know the details of how Roz and Andy met!