Review: FOR KING AND COUNTRY (The Royals Saga #1) by Geneva Lee 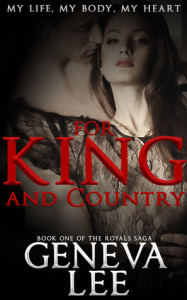 When he kissed me, I was shocked. He was a stranger and still so familiar. It wasn’t until I woke up to my picture splashed on the cover of tabloids that I realized I knew who he was.

Exiled heir to the throne.

He isn’t Prince Charming. He’s controlling. He’s demanding. He’s dangerous. And I can’t say no to him.

We both have secrets—secrets that could tear us apart or drive us closer together—and as the paparazzi exposes each one, I have to decide just how far I’m willing to go for King and Country.

What happens when a beautiful commoner meets a hot, bad boy prince? No, you don’t get a story about Prince Harry and beautiful blonde!! You get Geneva Lee’s For King and Country!!

Clara Bishop has just graduated from Oxford University. At the graduation party, held at the exclusive Oxford and Cambridge Club, she finds the room too crowded and loved ones (including her roommate) too well-meaning. In an effort to escape it all, Clara flees the party with the intent of getting some air. She wasn’t prepared to find that air filled with the presence of an incredibly handsome, very commanding man. Clara finds that she is drawn to this stranger in a way that she never has been drawn to a man before. In an unexpected moment of passion, Clara and her stranger share an explosive kiss, only to have it end as quickly as it began. Long after the stranger rocks Clara’s world and walks out of it, Clara can’t keep the incredibly sexy stranger out of her mind or dreams.

Unbeknownst to Clara, she has just locked lips with the British Monarchy’s resident bad boy, Prince Alexander. A man with a wounded past and a penchant for naughtiness, Alexander finds Clara’s freshness and naiveté both compelling and sexy. His brief, but passionate encounter with her leaves him wanting more of her. In an effort to fulfill his desires (and hers), Alexander seeks her out and makes Clara an offer she can hardly refuse.

Full of secrets, drama and naughtiness, For King and Country keeps the reader involved and interested. While the writing is solid, there were times where the story seemed to drag and Clara’s indecisiveness drove me nuts!! (He’s a freakin’ PRINCE for crying out loud!!! Go for the ride, honey, and don’t spend too much time thinking about it!!) MY biggest issue with the story was the HUGE cliffhanger at the end. Like HUGE cliffhanger!! The kind of cliffie where even the longest string of cuss words ever was not a balm. Geneva Lee, you are killing me!!! Hurry up with Book 2, please!!

I give For King and Country 4 stars because when a beautiful commoner meets a hot, bad boy prince you get a great read!!

Geneva Lee prefers fantasy to reality, especially fantasies involving powerful, dangerous, and sexy men. You can find her devouring a good romance while avoiding the laundry and the children. She lives in Seattle with her family.