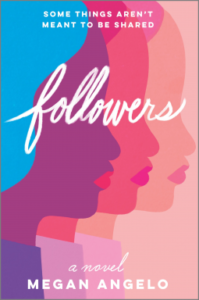 Influencers.  YouTube stars.  Likes.  People sit next to each other but text instead of speaking to each other.  Social media is King.  One comment can make you the darling of the internet or drop you into oblivion.

Followers – so titled because your life depends on ever-increasing the number of followers higher and higher.  The story is given to us in the “present” which is 2055 and flashbacks to 2015.  The crème de la crème of society live in a town called Constellation.  How it came to exist and how the characters got there is the thread that weaves Orla, Marlow, and Floss together.

Cellphones as we know them today mostly exist through a device on the writs that are connected to people’s brains.  Screens long gone, blamed for an Alzheimer like disease that turned people catatonic.

Marlow is a superstar.  Her entire life orchestrated, plotted and scripted by the powers that be for maximum consumption by her viewers.  You too can be as beautiful as Marlow by purchasing her entire ensemble right now!  Her personality is medicated.  Her life is fake.  Her marriage is fake.  Even the fate of her ovaries is debatable for the sake of increasing her followers.

Orla bides her time at a blog called Lady-ish while promising herself that she’ll write the great American novel.  She is smart but timid and does not speak up for herself.  Of course, this makes her a pushover for the users around her.  Especially her own roommates.

Floss is the skim milk of the trio.  Desperately wants to be relevant, rich and famous.  The problem is she has no talent to speak of that could set her apart.  However, she is cunning.  She knows exactly what button to push to get what she wants from people.

Chapter by chapter we’re given a picture of a future that is very plausible considering we are already in that matrix so to speak.  Then Marlow ditches her meds and shit gets real!  She starts digging and digging and all their lives change in a way that I never imagined when I started this book.

This happens to be the author’s debut novel.  Seriously?!  OMG, this freaking book!  Followers is a smart, mind-blowing Trumanesque commentary on life lived through the lens of social media.  As is many times the case, these characters exist in a world based on appearances and perception instead of truth and reality.  Megan Angelo had me from get-go.  I want to meet her, take her to lunch, buy her a drink and then pick her brain after we order every dessert on the menu.

An electrifying story of two dream-chasing friends, the dark choices they make, and the profound moment that changes the meaning of privacy forever.

Orla Cadden dreams of literary success, but she’s stuck writing about movie-star hookups and influencer yoga moves. Orla has no idea how to change her life until her new roommate, Floss—an ambitious, wannabe Kardashian—comes up with a plan for launching them both into the high-profile lives they so desperately crave. But it’s only when Orla and Floss abandon all pretense of ethics that social media responds with the most terrifying feedback of all: overwhelming success.

Thirty-five years later, in a closed California village where government-appointed celebrities live every moment of the day on camera, a woman named Marlow discovers a shattering secret about her past. Despite her massive popularity—twelve million loyal followers—Marlow dreams of fleeing the corporate sponsors who would do anything, even horrible things, to keep her on-screen. When she learns that her whole family history is a lie, Marlow finally summons the courage to run in search of the truth, no matter the risks.

Followers traces the paths of Orla, Floss and Marlow as they wind through time toward each other, and toward a cataclysmic act of terrorism that sends America into lasting upheaval. At turns wry and tender, bleak and hopeful, this darkly funny story reminds us that even if we obsess over famous people we’ll never meet, what we really crave is genuine human connection.