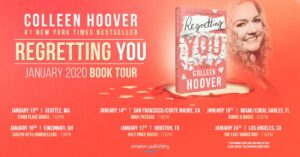 WOW WOW WOW! Colleen Hoover is amazing! She has once again flexed her writing muscles to bring us Regretting You. Although it is a YA novel it is definitely written for the more mature audience. There are so many “old school” vibes! The writing style of Regretting You has all of the “feels” and the flow that was found in her early books like Hopeless, Slammed, & Point of Retreat.

Regretting You is about love, loss, and circumstances. It is told from the perspective of mother & daughter; Morgan and Clara. Colleen Hoover delivers a 1~2 punch early, then a second round, with the fallout flowing through the remaining chapters.

Morgan Grant and her sixteen-year-old daughter, Clara, would like nothing more than to be nothing alike.

Life was simple and predictable for Morgan Grant until the unimaginable occurs. Now she must move forward and make decisions that will be best for herself and her daughter. She is navigating life’s roadblocks while trying to protect Clara from devastating secrets and lies.

“You’re a sacrificer. I don’t even know if that’s a real word, but that’s what you are. You do things you don’t want to make life better for the people around you.”

With everything coming apart around her, Clara struggles to cope and process the truth as she believes it to be. This results in her whole world turned upside down. Resentment, betrayal, anger, and hatred all play pivotal roles in the choices that she makes. Morgan is desperate to keep Clara from repeating her own mistakes while keeping her happy memories in place.

I did not want to put Regretting You down and stayed up into the wee hours of the morning to finish it! It is thought-provoking, heartfelt and brilliantly written. Although it revolves mainly around Morgan and Clara, there are other characters in play as well. They too are affected by the choices that are made and the consequences that follow.

I feel I must also give my disclaimer as I do with every Colleen Hoover book. All I can really say is: Go in “blind,” meaning don’t read reviews, don’t get caught up in the hype. Take your time and savor the words that are beautifully written. It will be emotional, but in the end, it is worth it. Hold on tight because you are in for one hell of a ride. This allows for greater enjoyment of the story.

“Sometimes you have to walk away from the fight in order to win it.”

One of my favorite things about reading Colleen Hoover is that I never know what she’s giving us.  It’s always a gift her words, but her subject matter is always a bit different.  She’s so versatile that I find that makes her that much better.  She’s never in a rut in my opinion.

Regretting You reminds me a bit of Slammed but is by no means anything like Slammed.  How a woman of 3 teenaged boys can write and relate to the life of a teenaged girl with such clarity I will never know.  This book is a mother and daughter and their relationship. Their relationship is put through the worst possible sadness and it continues to trickle down after the initial shock.  Navigating their grief was as if I was sitting there; feeling their loss, their sadness, and their anger.

Hearing Clara and Morgan’s alternating POV and seeing each of their views made this book perfection for me.  Seeing the parallels between their lives and the blurred lines that may not have been so blurred is what kept me reading for hours and hours.

Another masterpiece of words for Colleen Hoover.  There is a reason she’s often called the Queen.

This book isn’t what I’ve come to expect from Colleen Hoover, but I enjoyed every word. In Regretting You, we get equally beautiful perspectives from both a mother and a daughter as they navigate love, grief, and teenager-hood. There were little unexpected twists and total swoon-worthy moments. I loved flipping back and forth between the two voices: Clara’s (daughter) and Morgan’s (mother). This is a book that moms and daughters can read together, but it’s not just about their mother/daughter relationship. It’s about their individual romantic relationships and how those relationships impact one another.

What I think Hoover does so well, is the way she weaves the stories together. The way she mirrors certain aspects of Clara’s relationship with Miller and Morgan’s relationship with Jonah makes the story so much richer. And even though the voices are similar in some ways, they sound nothing alike when you’re reading them. It was truly my favorite part of the book.

Even though there are definitely sad moments in this book, overall this is much lighter than most of Hoover’s other books. If you’re looking for something lighthearted and romantic with feel-good vibes at the end, this is the book for you! 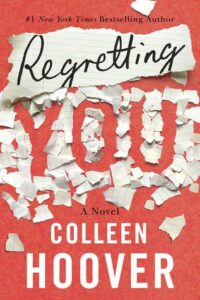 Morgan Grant and her sixteen-year-old daughter, Clara, would like nothing more than to be nothing alike.

Morgan is determined to prevent her daughter from making the same mistakes she did. By getting pregnant and married way too young, Morgan put her own dreams on hold. Clara doesn’t want to follow in her mother’s footsteps. Her predictable mother doesn’t have a spontaneous bone in her body.

With warring personalities and conflicting goals, Morgan and Clara find it increasingly difficult to coexist. The only person who can bring peace to the household is Chris—Morgan’s husband, Clara’s father, and the family anchor. But that peace is shattered when Chris is involved in a tragic and questionable accident. The heartbreaking and long-lasting consequences will reach far beyond just Morgan and Clara.

While struggling to rebuild everything that crashed around them, Morgan finds comfort in the last person she expects to, and Clara turns to the one boy she’s been forbidden to see. With each passing day, new secrets, resentment, and misunderstandings make mother and daughter fall further apart. So far apart, it might be impossible for them to ever fall back together. 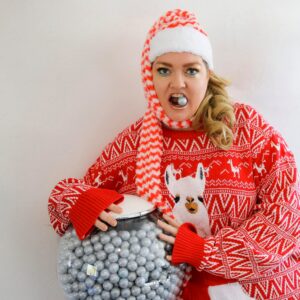 Colleen Hoover is the #1 New York Times bestselling author of several novels, including the bestselling women’s fiction novel It Ends with Us and the bestselling psychological thriller Verity. She has won the Goodreads Choice Award for Best Romance three years in a row—for Confess (2015), It Ends with Us (2016), and Without Merit (2017). Confess was adapted into a seven-episode online series. In 2015, Hoover and her family founded the Bookworm Box, a bookstore and monthly subscription service that offers signed novels donated by authors. All profits go to various charities each month to help those in need. Hoover lives in Texas with her husband and their three boys. Visit www.colleenhoover.com.