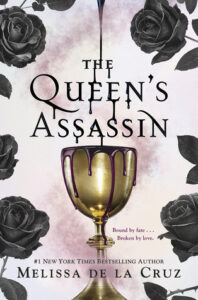 Somehow, this was the first book I have ever read by De la Cruz.  While one would think a book titled The Queen’s Assassin would have a lot of assassinations, there weren’t all that many.  There was, however, magic, mystery, and romance, all of which kept me plenty entertained throughout the book.

Shadow and Cal definitely fall into my group of ‘character types I will never stop reading about’.  Shadow is a strong female lead who isn’t afraid to do what she feels needs to be done. Cal is a brooding assassin/warrior which is always fun to read about.  Those two character personalities are almost always entertaining for me.

I enjoyed that the book switched POV, allowing us a look in each of their heads.  Overall, if you’re into fantasy, you’ll probably find yourself enjoying this book. Unfortunately, you’ll have to wait to see how the story ends since there’s supposed to be a sequel.

Beloved by countless readers all over the world for her fifty novels spanning genres of fantasy, historical fiction and contemporary realism—de la Cruz now presents an epic tale of an assassin sworn to protect his queen and country, and his apprentice—a young woman determined to forge her own path in the world. Romance, intrigue, action, suspense—with many surprises along the way—this is a story certain to delight the bestselling author’s wide and diverse legion of fans of all ages.

Caledon Holt is the Kingdom of Renovia’s deadliest weapon. No one alive can best him in brawn or brains, which is why he’s the Guild’s most dangerous member and the Queen’s one and only assassin. He’s also bound to his sovereign for life by the vow his father pledged—to find the missing Deian Scrolls, the fount of all magical history and knowledge, stolen years ago by a nefarious sect called the Aphrasians.  Shadow has been training all her life to follow in the footsteps of her mother and aunts—to become skilled enough to join the ranks of the Guild. Though magic has been forbidden since the Aphrasian uprising years before, she has been learning to control her powers in secret, with the goal that that one day she’ll be an assassin as feared and revered as Caledon Holt.

When a surprise attack brings Shadow and Cal together, they’re forced to join forces to hunt down a new sinister threat to Renovia. They butt heads about every decision, but in spite of themselves, there’s an undeniable attraction, and the couple grows closer.  Through their adventures together, they uncover a shocking web of lies and secrets that threaten to destroy everything they hold dear. With war imminent and true love at risk, they will have to do whatever it takes to save each other and the kingdom they’re both determined to protect.