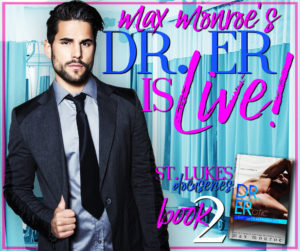 Just thinking about it makes me smile.

As the new face of the reality docuseries, The Doctor Is In, I plan to take his power and recognition right to the streets of New York City and into the pants of willing women.

Well, that was my plan.

A gossip columnist that just loves writing about yours truly, she’s everything I thought I never wanted and then some.

She drives me crazy.

Problem is, she doesn’t want to be anything when it comes to me—not friends, not lovers, not even adversaries.

God, I love a good challenge.

Get ready, Harlow. Love is contagious.

Ahhhh….you now when Max Monroe releases a book your are in for a good time!

Dr. ER(otic) is no different.  Scott Shepard (yup – Dr. Sheppard – feel free to think of McDreamy while reading, I know I did!)  – the next featured doctor on the St. Luke’s Docuseries.  He’s the ER doc who will capture your heart and soul with his funny quirks, his swooniness and the way in which he relates to Harlow.  Unlike his other featured doctor friend Will (Dr. Ob), Scott was able to keep his bedroom shenanigans out of the limelight while on the docusersies. (Don’t worry – he will have some shenanigans with Harlow!)

Ah – there’s Harlow.  I thought I liked Cassie -but she’s given Cassie  ride for her money.  She’s not quite as outlandish as Cassie but something about her just grabbed me and kept a hold.  The way in which she meets Scott will have you laughing out loud and cringing at the same time.  I the way in which you have come to love Max Monroe is in full effect during their meeting.   Harlow, a gossip columnist, with morals, meets Dr. Sheppard and begin a little series of her own.  This may come back to bite her in the butt – but oh – the nibbling is so much fun to read about!!

There is a bit of a chase with these two, so the build up is legendary.  Harlow & Scott aren’t like the other Billionaire Bad Boys or even Will, he’s his own man his own person, there is not stereotypical character here!  It’s one of my favorite things about Max Monroe books, each one is fresh and new.  But yeah – you want to know – we do get to see our old friends – Will & Melanie,  Georgia & Kline, Thatch & Cassie and Winnie & Wes.  The gang is back together!

Side Note: – you will NEVER, EVER, EVER hear Shakira’s “My Hips Don’t Lie” and NOT think of Dr. Scott Sheppard!

Reader Blitz Giveaway for a chance to win one of TWO $50 Amazon gift cards, here’s the link: 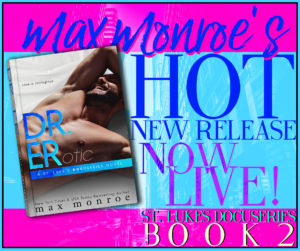